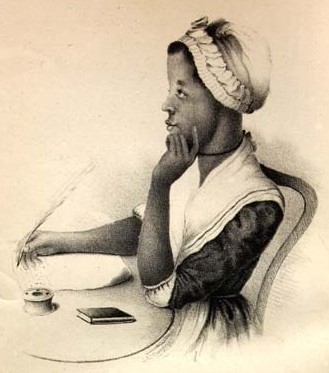 Phillis Wheatley Peters, an enslaved woman in the 1700’s, was a hugely popular poet before the 20th century. She was both the second woman and the first African American to ever publish a book. Her poetry left a big impact on history, proving that black people can be equally intelligent and eloquent as white people.

Born in Gambria, South Africa, Wheatley was sold to Susanna Wheatley and John Wheatley at the estimated age of 7. The Wheatley family educated the girl on many subjects: reading/writing, history, British literature, Greek and Latin classics, astronomy, and geography. She took a particular liking to the Bible, and wrote much about religion and beliefs.

When she was 14, her first published writings were released to the world. “An Elegiac Poem, on the Death of the Celebrated Divine George Whitefield” (1770) began her rise to popularity. The young woman left home with the son of the Wheatleys to travel to London in 1773. The purpose of this trip was to publish her first book, Poems on Various Subjects, Religious and Moral. The work was supported by many noteworthy people, two of which being John Hancock and Dr. Benjamin Rush. She even wrote a poem to George Washington during the American Revolution in 1775!

The writing of Wheatley has been used in the fight for equal rights; her words were used to prove to many that people of color are no different from white people in terms of cleverness and talent. Following this, she began arguing for civil rights, writing letters to ministers and other prominent figures in society.

On April 1, 1778, Wheatley Peters married John Peters, a free black man from Boston. Peters was an ambitious man who hoped to be a successful entrepreneur. The couple struggled to find work due to the color of their skin and were thrown into poverty. Peters was often searching for a job and dodging debt collectors, leaving Wheatley to fend for herself with her job as a charwoman.

When the two moved to a rundown apartment in Boston, other members of the family discovered Wheatley to be ill and lacking certain necessities for comfort. Despite her declining health, Wheatley continued to create influential poems. The artist died in December of 1784 due to complications in childbirth at 31 years old.

Phillis Wheatley’s poems helped in the fight against abolition. Her widespread and well-written works have been used to get closer to equality.