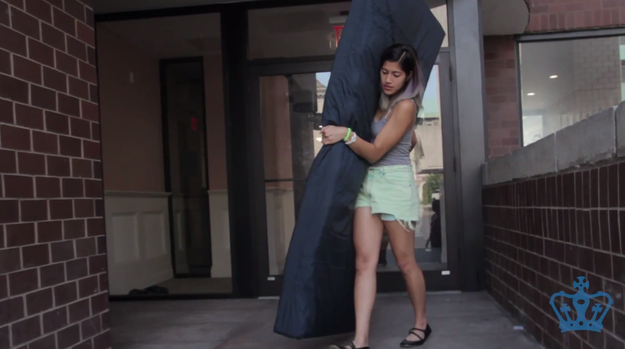 Beginning in early September with the start of her senior year at Columbia University, Emma Sulkowicz began lugging a dorm mattress around campus in what she calls an endurance art piece. A visual arts major, Sulkowicz made the mattress her senior thesis project in the name of both art and activism.

The first day of her sophomore year, Sulkowicz was sexually assaulted in her dorm. Dissatisfied with the university’s treatment of her report, Sulkowicz decided to take action on her own by carrying a dorm mattress with her until her attacker leaves campus. While there are some that question the credibility of Sulkowicz’s claims, the majority of fellow students and members of the public are standing with her in her project, titled “Mattress Project/Carry That Weight”.

During summer vacation, Sulkowicz spent time at the Yale Norfolk Art Residency. A video she was working on required her to move a mattress from a room; Sulkowicz said that “The image of me moving a mattress got stuck in my head. I think it was because I was raped in my own bed–it was a place associated with a lot of pain and hurt. The idea of me having to carry around my pain everywhere I go was reflected in me bringing the mattress, which is kept in a safe place, out into the light and into the public eye.” Columbia does not allow students to transport furnishings out of the dorms, so Sulkowicz purchased her own via the university’s provider.

Despite accusations from two other women–one a former student and one current–the unnamed attacker was found not responsible by Columbia. He was even granted permission to postpone his hearing for over half a year. While Sulkowicz’s professors support her and the project, Columbia’s administration has been anything but. “I saw the dean yesterday, the one who flat-out denied my appeal… He turned his entire body into a question mark,” Sulkowicz says. “He was staring at his feet… He wouldn’t acknowledge that this giant mattress was walking by.”

Sulkowicz rightly expects more from the Ivy League university than what she has been getting. “I thought it was a progressive school. I thought the resources they advertised from the beginning were real resources I could count on…It’s just been amazing how the bureaucracy has stifled me at what’s supposed to be such a progressive and liberal school,” says Sulkowicz.

In April, President Obama announced that the United States Department of Education would investigate universities to uncover discrepancies in their sexual assault policies and demand reforms to those policies. Columbia currently has 23 complaints against it for the mishandling of multiple assault cases, which violates Title IX, a federal civil rights law prohibiting gender discrimination and dealing with sexual violence. The Department is investigating 78 other universities and colleges, but has yet to decide on whether or not to look into Columbia.

While “Mattress Project/Carry That Weight” is primarily an art project to Sulkowicz, she still hopes that it incites a discussion both on campus and worldwide. She would like colleges to cop to their ineffective sexual assault policies and open the door for communication between student activists. “The most painful thing for me has been dealing with people who doubt me and think, ‘Oh she’s doing this art piece, she must be lying,'” says Sulkowicz. “I know what happened. Why would I lie about something that terrible?”

Sulkowicz’s project is a call for both her community and the nation to stand up against rape culture. Rape culture means that sexual violence is a tolerated norm, and it’s clear why that is detrimental. In this particular case, a few are discrediting a woman–even occasionally hitting on her using the project–because it’s art. However, far too often women are shamed, stigmatized, and denounced because they came forward to report an injustice done to them simply because of rape culture. Sulkowicz may be receiving apparently minimal backlash, but that is atypical. The students are just as responsible for making university campuses–and elsewhere–safe environments.