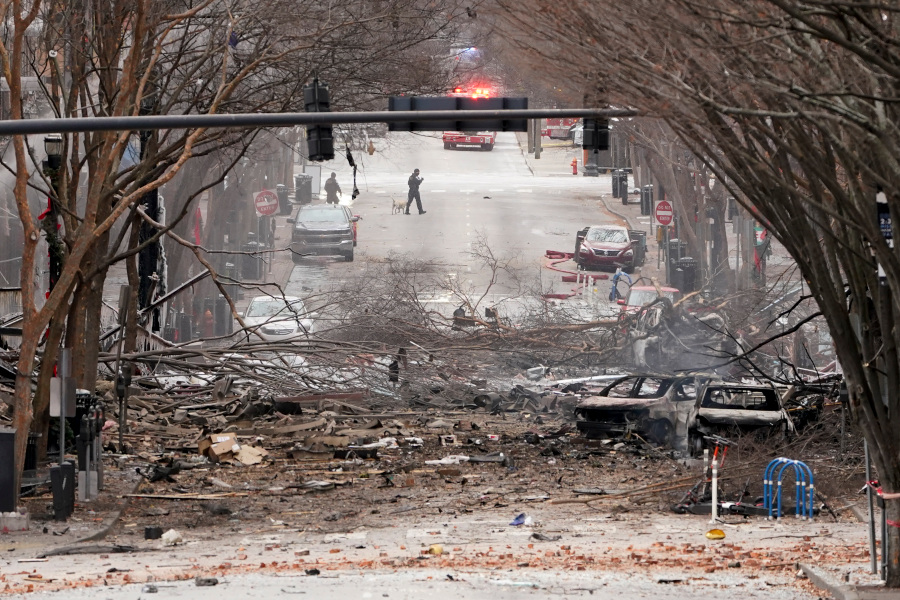 Emergency personnel work near the scene of an explosion in downtown Nashville, Tenn., Friday, Dec. 25, 2020. Buildings shook in the immediate area and beyond after a loud boom was heard early Christmas morning.(AP Photo/Mark Humphrey)

Just like the rest of this year 2020 Christmas was not the best especially for the people in downtown Nashville. Instead of waking up to joy and excitement the day started with a tragic event. Now that weeks have passed the police have gotten a full timeline and suspect of the crime.

It all started when traffic and security cameras captured a suspicious van driving near 2nd Avenue at 1:22AM Christmas morning. Then there were reports of residents hearing several gunshot rounds at around 5:30AM. Officers reported to the suspicious van parked outside the AT&T building. When officers came to take a look the officers and other residence heard a message coming from the vehicle.

The message stated, “Evacuate now. There is a bomb. A bomb is in this vehicle and will explode.” The message was extremely unnerving. Then next the real horror happened. The bomb went off in the RV at 6:30AM. The bomb impacted 41 surrounding businesses and injured supposedly 8 people and killed one man. Police and firefighters were called and got to the scene 15 minutes after the explosion. The man found in the van was Anthony Q. Warner.

Nashville Chief John Drake found some reliable reports from August 2019. The reports were from Anthony Q. Warners girlfriend claiming that he was making bombs in his RV. Warner was check out by F.B.I. agents and they found no trace of military background or any other way for him to learn to make a bomb. So at the time ,in August, although there was a report by the girlfriend police had no warrant to search his home. His only previous record was an arrest for marijuana-related charge. This bomb was not only meant to kill himself but to affect others around him.