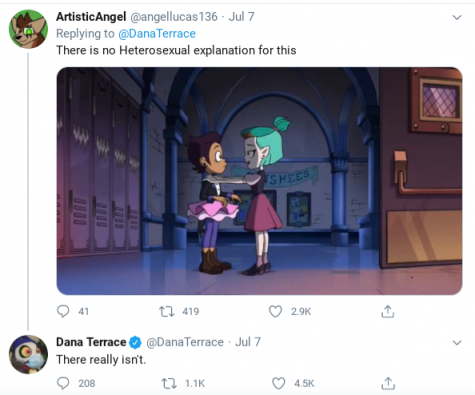 The show takes place in the magical realm of the Boiling Isles, where Luz has escaped to for the summer. She wants to learn magic, but there’s one big problem: humans can’t do magic – or so she thought. Luz finds her own way to perform magic, and she’s enrolled in the Boiling Isles’s school for witches. There, she meets and befriends many people, one of which is a girl named Amity.

Dana Terrace, the creator of The Owl House, recently spoke up about her plan to represent LGBT+ characters in the show:

“In dev I was very open about my intention to put queer kids in the main cast. I’m a horrible liar so sneaking it in would be hard haha. When we were greenlit I was told by certain Disney leadership that I could NOT represent any form of bi or gay relationship on the channel.
…
Luckily my stubbornness paid off and now I am VERY supported by current Disney leadership.”
-Dana Terrace on Twitter, @DanaTerrace

In “Enchanting Grom Fright”, Amity wanted to ask Luz to the show’s version of prom, but, sadly, she didn’t get the chance. The girls had to fight a monster that reflects your worst nightmare – and Amity’s was getting rejected by Luz. Despite never inviting her, they ended up dancing together to fight the creature.

In more a recent episode, it’s shown that Amity has an obvious crush on Luz. In “Wing It Like Witches”, Luz challenges the school’s Grudgby team to a game in order to stop them from bullying her friends. Grudgby is a sport in which two teams of three compete to earn the most points by creating and avoiding magical obstacles to get the ball through the rival team’s goal. She asks Amity to join their team, and Amity blushes heavily at the idea and runs off. Later in the episode, Luz tries to win the game on her own. Amity tells Luz’s friends that she needs help. She accidentally mentions that she loves Luz.

“Luz needs our help! I know she pushed you guys, and she always gets in over your head. She can be so stupid, which I love- I mean hate! In any case, she needs you right now, which is sweet- I mean, I hate it, and it’s dumb!”
-”Wing It Like Witches”

With Luz being confirmed to be bisexual, many think it’s pretty likely that the two will end up together. While the first season has ended, fans are looking forward to see if this relationship develops.