In the last week, the Ebola crisis has continued to ravage West Africa. The virus has hit Senegal, bringing the total number of cases to over 3,500 according to World Health Organization (WHO) director Margaret Cho. On the 8th, delegates from the African Union Executive Council held an emergency meeting in Ethiopia to discuss a strategy. With a death toll surpassing 2000 and counting, the United States is facing increased pressure to respond to the outbreak more effectively. President Obama said that the virus could mutate to become a threat to countries outside of those already affected. The U.S. military will spend $250 million to help with isolation units and equipment. Health workers involved with the treatment of Ebola patients are concerned with a shortage of suits. WHO estimates that $600 million will be needed to treat and help contain the crisis. David Nabarro, who is responsible for organizing the UN’s response to the outbreak, says that the top priority is to provide protective gear and hazard pay to health workers dealing with Ebola sufferers. 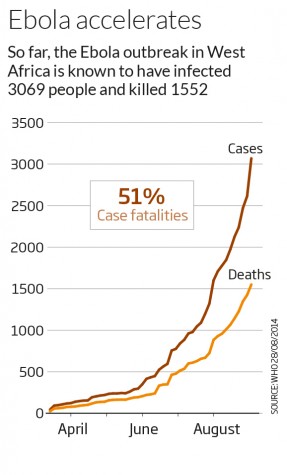