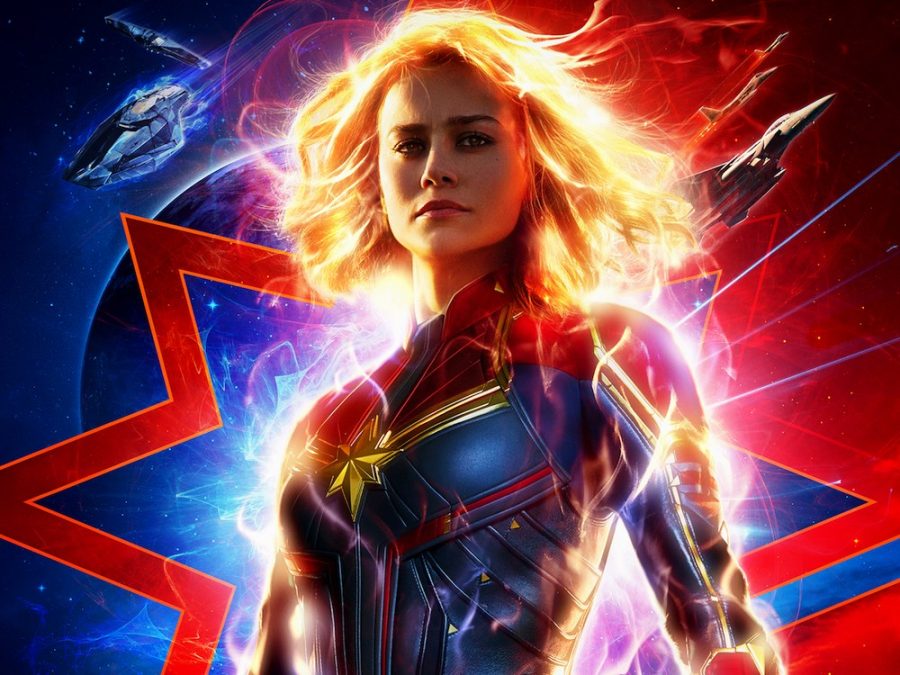 Is Captain Marvel just another superhero movie? Well, yes and no. Is it a slightly uninspired, samey origin movie that fails to add anything other than another superpowered player to the Marvel Cinematic Universe? Sure. But it’s also a sign of things to come; it’s indicative of a shift in focus on diversity, inclusivity, and proving that anyone can be a hero.
Captain Marvel tells the story of Carol Danvers, an Air Force captain who becomes embroiled in an intergalactic conflict between the Kree (an empirical warrior race seen in previous Marvel films) and the Skrull, a new race of shapeshifters with mysterious motives who oppose the Kree rule. Without giving away too much, Danvers finds herself allied with one side in this conflict but questions her allegiances as the film progresses. We meet a cast of new characters, such as Carol’s old friend Maria Rambeau and her daughter Monica and the Skrull leader Talos, as well as returning characters Nick Fury and Agent Phil Coulson.
The movie is set in 1995 and the movie does not let you forget it. My head felt slightly beaten over with all the references to Internet cafes, grunge culture, and defunct video rental stores. This wasn’t unexpected though. Most popular period piece movies set within the past 40 years tend to do that nowadays. That isn’t to say that it makes the movie less enjoyable. It’s just something that I noticed.
One of the most interesting aspects of the film was the Kree/Skrull conflict. Traditionally, in the comics, the Skrull are cut and dry bad guys. They use their shapeshifting abilities to infiltrate societies and take over entire unsuspecting planets. On the flip side, the Kree are the good guys, noble warrior heroes who protect others from the evil of the Skrull. However, in this film, the roles are reversed. The Kree are posed as the oppressors, bent on wiping out the Skrull for opposing their rule. The Skrull are a dwindling race of nomads whose only goal is to find a new home where they can’t be reached by the Kree. I think this divergence from the comics was a good move on the writers’ parts. It subverted the expectations of those who were aware of the Kree/Skrull dynamic in the comics and totally changed my perception of the overarching conflict.
This movie is not without its flaws though. I found Brie Larson’s performance somewhat flat and aloof. There was this disengagement in her interactions with other characters that came off as almost a disinterest. The most chemistry she had with any other actress was with Lashana Lynch, who portrayed Carol’s friend Maria Rambeu. Beyond this warm, deep friendship, Carol’s other connections felt bland and cold in Larson’s hands.
While being fun and rompy, this film was uninspired and without substance. It felt like another superhero origin film and followed many of the same beats we’ve come to expect from this type of movie: snarky, unsuspecting nobody gains fantastical powers through sci-fi accident, seemingly good-natured mentor betrays hero, hero must overcome some mental or emotional block to unlock their full power. There were few ideas introduced that I found interesting or engaging.
Oh, and the fact the Nick Fury’s eye was scratched out by a space cat? That was stupid. Not even “funny” stupid, just stupid.
Overall, Captain Marvel proved to be simply another entry into the generally well-maintained MCU. It’s exciting to see a female-led superhero movie. Diversity is always important in attempting to build a believable, relatable fictional world. This movie is, in a word, serviceable. And, in another, fun. I’d recommend most people see this if you’re looking for an easy-going flick that doesn’t require extensive knowledge of the other 20-something films.