This years US Open has drawn global attention, but not for reasons you would think. Serena Williams, a seasoned Tennis player of twenty-three years, received three violations in the second set her match against Naomi Osaka. Chair Umpire, Carlos Ramos, gave Serena one violation for supposedly receiving coaching from her coach in the stands, which lead to the two other violations.

When interviewed ,Tess Barnes (12), recounted that after Serena received the violation she was, “overly emotional and went off about how cheating was against her morals.”

A great majority of Serena’s fans hold the opinion that she was not only incapable of cheating, but unfairly treated because of her gender.

However, when asked if sexism played a role in this case, Rachel Scheffer (12) says, “No, if she was a man she probably would have been treated the same way.”

For Scheffer, gender bias was not a factor in Referee’s call, but she believes that Serena’s emotions were running high as this was, “…her first big event back since having her kid and she wanted to prove something.”

As Hunter Randolph (12) sees it, “She will be fine, she’ll come back from it.”  For Serena, this incident is just a minor setback. 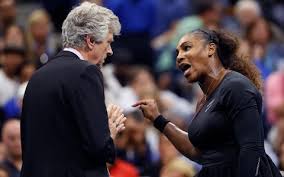