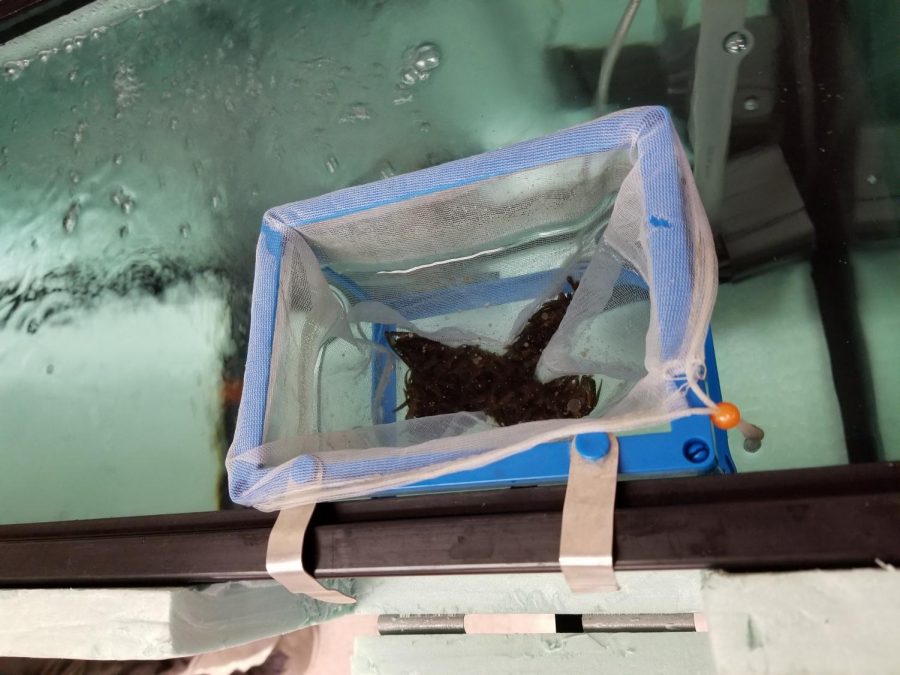 The trout in their incubator, where they are feeding on the yolk sac.

As of recent studies, it is seen that students are sometimes more successful in the classroom when the work is hands-on and experimental. Another way to grasp their attention is through animals. Mr. Andy Kerr plans on accomplishing this by opening his class to an unusual species — rainbow trout.

“What we are trying to do is open their eyes to a little bit more of stuff outside of school, so they can actually see life happen, see life begin. It’s a good way to learn about the nitrogen cycle and how it actually works in an enclosed environment because we have to do chemistry tests [on the water] every so often to test for the PH, nitrites, nitrates, and ammonia. In biology, we have to do chemistry as well. It’s just trying to get them to open their eyes,” said Kerr.

His classes will study the trouts and Kerr will find a way to link back to his history of fly fishing.

“I was a flyfisher guide before I became a teacher here. Being a member of Trout Unlimited, I heard about trout in the classroom and [I decided] if I ever got back into teaching, I would want to do this. [The idea to raise trout] really came from my love for flyfishing and how conservation really can help everything. Another reason is because I really like fish and I think the tank brightens the room a little bit. Kids get excited to come to the back of the room and look at them. It gives them another reason to get excited about school and learning. I also like the sound, and I like fish tanks. Trout are one of those species that not a whole lot of people know about. They’re up in the mountains and can only survive in cold waters. Hardly any of my students have ever seen or held a trout. They’re a lot more appealing to me than, say, bass, bluegill, the warm water species. Trout is basically my spirit animal,” said Kerr.

Trout Unlimited, a company specializing in trout and the Trout in the Classroom program, provided Kerr and his students with everything they needed in order to take on this project — the tank, storage, stand, chiller, bubble, oxygen tank, and filters. They arranged for the tank to be set up in early January, and the fish arrived within the first week of February, hatching about ten days after that.

“There is about 200 fish in there and there is around a eighty percent survival rate. There should be around 160-190 fish in there. But when we release them in May, there is a lot higher death rate because they become a bait fish. Here, there is a really high survival rate. Out of this batch right here there was 200,000 eggs. And that’s basically how things work in nature; not everything’s going to survive. It’s the law of the land — the strong survive,” said Kerr.

After the yolk sac cannot give the fish any more food, the class plans on maintaining the health of the fish by performing routine ‘chores’, like dechlorinating water in order to keep water levels consistent, cleaning the tank, and regulating food, bacteria, and chemistry levels.

“We feed them in small amounts [because the leftovers causes] the chemistry balance to be way off if you have got too much food in the tank and not enough fish eating it. We have to maintain all this stuff or it will kill them,” said Kerr.

Interestingly enough, the middle school can attest to this way of learning after doing it themselves. The school has a partnership with Trout Unlimited, too, allowing them to study the lifecycle of a trout at an earlier, middle school age.

“The middle school has one, too, which goes from summer until the end of fall and another one that starts in the winter and ends in the spring,” said Kerr.

Right now, not much is happening with the trout. They are in their Alevin stage, where they do not do much, except feed of the yolk sac, which provides them food or a limited time — until they are able to swim to the surface of the water and eat the starter food that the fish are given by humans. Soon, students will be able to see a change happen in the trouts’ tank, but everyone will be anticipation May when the trout are released. Many students are even willing to go with Mr. Kerr to say goodbye to the fish and watch the cycle of Trout in the Classroom end.

“We will release them in the mountains up in Walland or Townsend at the length of about two or three inches sometime in May. The whole process goes basically one semester. Everyone wants to go on a field trip to release these guys,” said Kerr.

In the meantime, if you do not have Mr. Kerr for biology or are looking to brush up on the lifespan and stages of trouts, you can check this site out and this one also.