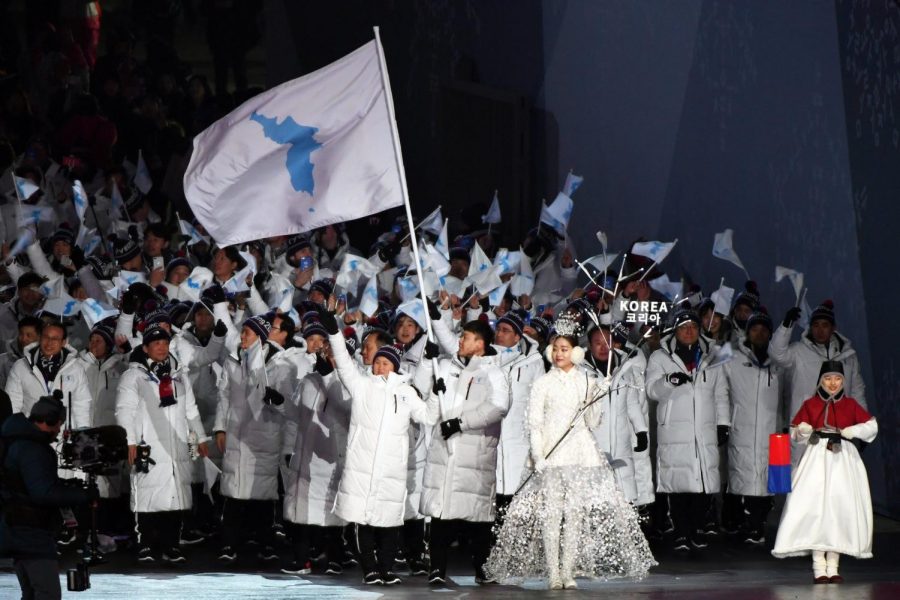 Most people have heard that the 2018 Winter Olympic games are being held in PyeongChang, South Korea. While the destination is chosen several years in advance, this place is of importance when discussing the tension between the democratic style government in South Korea and the dictatorship in North Korea. The games are also holding the controversy of Russian athletes during the last winter olympics that were held in Sochi, Russia in 2014 competing this year under different countries.

This close location to the sight of many controversies and tensions led to the uniting of the South Korean and North Korean athletic teams. On the night of Friday, February 9, the two teams walked into the opening ceremony together under the team name Korea. Furthermore to show even more unity, the flag each athlete carried was not from either respective country but was in fact a depiction of the entire country of Korea as a whole. This was not expected to happen at first considering that North Korean citizens are not normally permitted to leave the country especially into South Korea. There had to be a special entrance made by the athletes through the DMZ (demilitarized zone) on the border between the two countries.

In a previous Winter Olympics held in 2014, Russian athletes were found using drugs to enhance their performance. The council that rules over the Olympics ruled that there should be no team from Russia allow to compete in the 2018 games. The council then followed up by taking possession of all the medals won by Russia in that year whether the winner had used the drug or not. Some of these athletes are so passionate about their sport that they decided to still play this year. Luckily, these athletes were not originally born in Russia or they have moved to a different country; therefore, they can play for different nations.

While they compete for a different country they aren’t leaving Russia behind though. They have an inscription on their lapel that states they are from Russia. Also, if one of them wins a medal instead of the national anthem from the country they are playing for being played it will be the olympic anthem to show a kind of neutrality. They are not playing for their country anymore because now they are just competing for themselves to win and not for a national pride due to the injustices several years ago.

The opening ceremony showed these different countries coming together and how all of these nations can come together and put their political differences aside for these few weeks out of the year. Countries that have been rivals for years and others that have committed scandals are competing together for fun and not to outshow one another. In this festival of nations and showing of talents, people can appreciate the cultures of athletes around the world as they play in winter games.