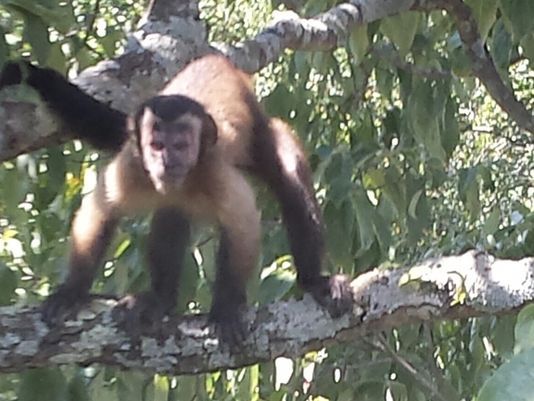 Alert! Alert! DANGER there is monkey business going on in Knoxville, Tn! Pretty Boy Floyd, a black-capped Capuchin monkey, had escaped and was living free and in the wild for one week.  Many people got to view the monkey throughout knoxville. He was swinging through trees and hanging on fences.

There were many people trying to catch Pretty Boy Floyd, but he was no match for them. They had nets and other animal-catching cages, but this three-year-old monkey couldn’t be caught. That is when the daughter jumped in to save the day. She captured him around noon on Sunday, August 27. She got the monkey’s attention with honey, which made the monkey come to her. The owner, Mr. King, was on the verge of tears when he got Pretty Boy Floyd back.

Pretty Boy Floyd is a special monkey. He helps his owner with PTSD and other problems, too. Many people were not scared of the little monkey and took pictures of it, while others called animal control.

Brian Zavala (10) said, “[I would] hide [because] they are dangerous, then call animal control.”

Many people would probably do the same thing, while others might try and touch it. Pretty Boy Floyd had somewhat of an adventure exploring Knoxville, TN.