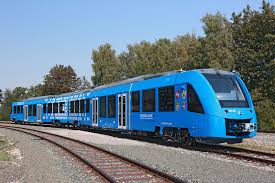 Think of an extremely quiet train that doesn’t emit harmful toxins into the atmosphere. With modern technology advancing every day, this train has been made possible.

This past March, Germany has created a hydrogen-powered train. The train is named the Hydrail. The Hydrail was invented by Alstom, a French multinational company operating worldwide in rail transport markets.

The Hydrail was made to match the performance of diesel-powered trains, while using and releasing unharmful toxins into the air. The train runs on hydrogen, which is a benign and clear gas. “It sounds like it will help clean the environment up,” said Frank McQuilkin(9).

Astom has developed the train to be a passenger train, which has the capacity for up to

thirty people. It has also cut down the sound levels that diesel trains give off. Jens Sprotte, a worker at Astom, says,”The only sound it gives off comes from the wheels and air resistance.”

The makers of the Hydrail have found a way to conserve left over fuel. This increases fuel efficiency levels. The only emissions the train gives off are steam and water, which allows small impact on the environment. The trains project manager at Astom, Stefan Shrank, says, ”It’s so clean you could breathe in it.”

The Hydrail can run 500 miles with 300 people per tank. Each two-train cars requires a fuel cell and a 207 pound tank of hydrogen to supply it. The first operational hydrogen-run trains should be out in 2018. This will replace the 4,000 diesel trains currently running in Germany. According to the EU, around 20% of Europe’s current rail traffic trains run on diesel.