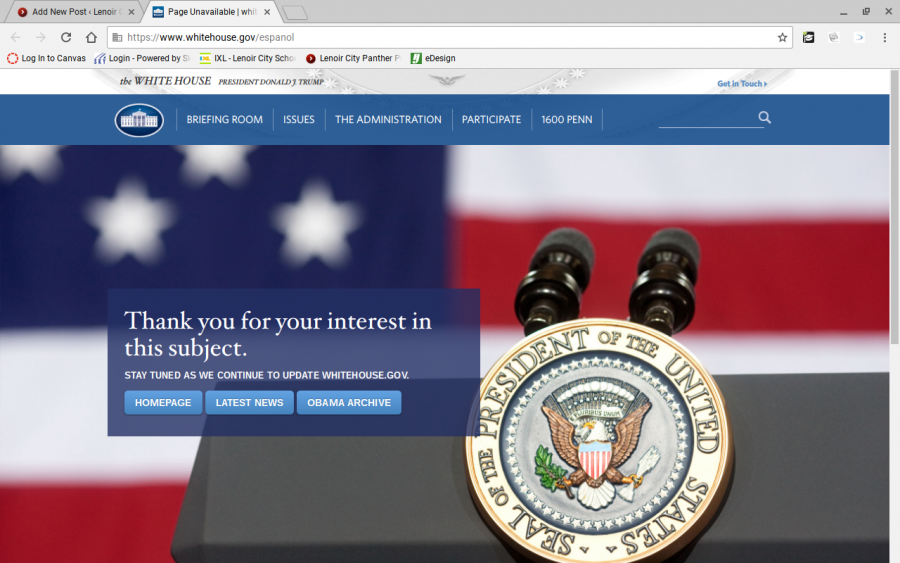 We live in a digital era in which we use computers or iphones instead of reading on paper. The past January 20th, Donald J. Trump became the 45th president of the United States of America, and with that, all of the websites of the White House started changing. For example, the Twitter Account @POTUS, which President Obama used, now has all of the information of President Trump. But one of the controversies about this transition was, after President Trump took the Presidency, the fact that the official website for the White House in the Spanish language was gone. Media in general started rumors about this theme saying that this is one of the actions that President Trump’s cabinet did about their position about immigrants. The official website of the White House in Spanish was really useful to a lot of Hispanic families, as it helped them understand a lot of the actions that the government is doing.

The website www.whitehouse.gov/espanol was removed after 9 years. The ex-president of the United States, Barack Obama, and his cabinet made this website in 2009 dedicated to one purpose only: to bring all of the news and information to the Hispanic people who don’t know English, so they could be informed about what is happening in the country. Not only was the website in Spanish removed, but the Twitter account @LaCasaBlanca and the page on Facebook “La Casa Blanca,” was removed, as well.

With all of these controversies, Sean Spicer said they have a lot of people working on it.

“There was a lot to do and we had done a lot of work on the website to make sure that we were prepared to get as much information up as fast as possible,” said Spicer. After this announcement the @LaCasaBlanca account posted a tweet. ¡Hola! ¡Bienvenidos a @LaCasaBlanca! Sígannos para mantenerse al tanto de las últimas noticias sobre @POTUS Trump y de su administración! Which in English is “Hello, Welcome to @LaCasaBlanca. Follow us to keep up with the latest news of @POTUS and all of his administration.”