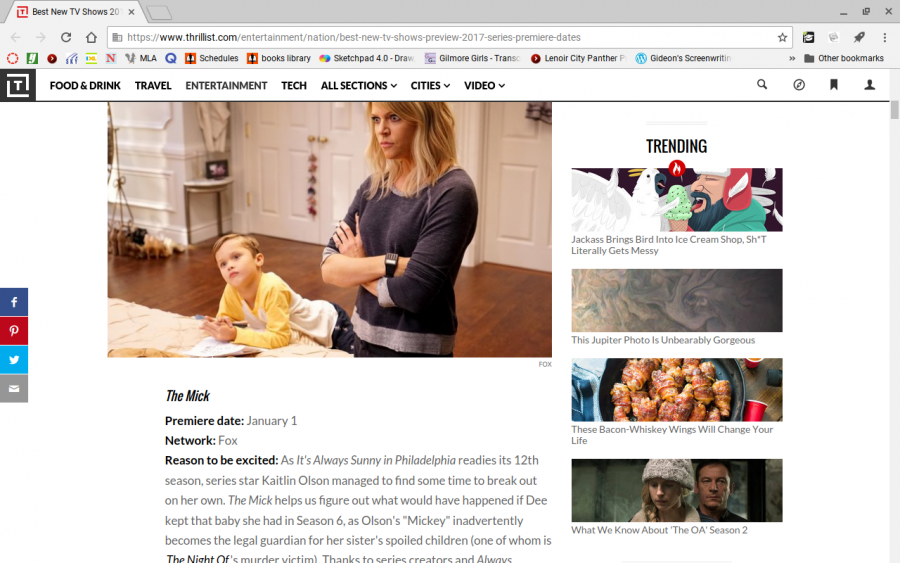 Screenshot of the Mick television synopsis from https://www.thrillist.com/entertainment/nation/best-new-tv-shows-preview-2017-series-premiere-dates.

Addiction. It’s the key to television. Many channels thrive off their viewers’ addiction of tv shows. The channels survive by the views and often this inspires new shows to pop up, which gives us all the new shows every year. “I am most excited for Doctor Who this year,” said Autumn Davis (11).

One of the new shows we are getting this year is Z: The Beginning of Everything about the rebellious wife of F. Scott Fitzgerald. Another happens to be an adaptation of the Archie comics, Riverdale, with Cole Sprouse (you may remember him and his brother in Suite Life of Zack & Cody and Suite Life on Deck). Vanessa Hudgens is getting her own superhero-y comical show called Powerless. We will get another chance to determine if Shailene Woodley is a good actress or not in Big Little Lies, a murder mystery said to be in a similar tone to Girl on the Train.

January brought Lemony Snicket’s A Series of Unfortunate Events starring Neil Patrick Harris as Count Olaf and Patrick Warburton as Lemony Snicket. The Mick is about a woman who becomes the caregiver to three pretentious children but has no idea how to take care of kids correctly and debuted on the first of January. You thought we had enough car karaoke in 2016 but now there is a whole tv show dedicated to karaoke in cars, Caraoke Showdown.

As for shows that get a new season this year . . .

There is American Horror Story, Arrow, Archer, The Big Bang Theory, Black Mirror, The Blacklist, DC’s Legends of Tomorrow, and The Flash–to name a few.

And goodbye to a few shows like Grimm, Murder in the First, and Orphan Black.