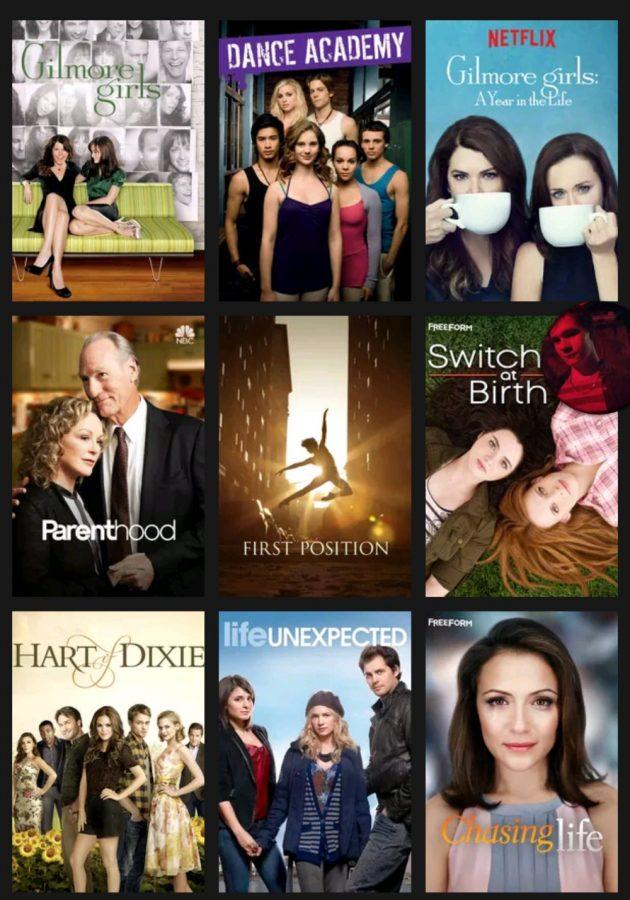 Featured with the original show and other shows and films related to the producer's genre.

Note: I would prepare yourself with popcorn and Netflix. May contain spoiler-y comments.

Everyone has a special group, musician, tv show, or movie that eventually gets cancelled or stops performing for some reason or another. Some don’t get to witness new production of their interests. Others, such as the fans of the early 2000’s show Gilmore Girls, are granted more insight into the lives of their idols.

Beloved Gilmore Girls follows the lives of Lorelai Gilmore and Lorelai (Rory) Gilmore. Lorelai had Rory when she was sixteen and moved away from her childhood home to take care of Rory under her own rules. Rory is an adept student who gets the chance of a lifetime when she is accepted into Chilton Private High School. The only problem is the financial situation she and her mom are hindered under. Luckily and unluckily, Lorelai decides to visit Emily and Richard Gilmore–her parents–to ask for a loan; in return for the loan, the two have to attend Friday night dinners until debt is paid.

After the show ended, fans were devastated and life went on. I started watching it a few months ago and close to the 25th of November, I finished. I, myself, was heartbroken by seeing that I was close to the end but found out about the revival season.

The revival happened the day after Thanksgiving. Millions of fans took to Netflix to watch the four, almost two hour, episodes, including myself. The internet was shocked by the episodes (named ‘Winter’, ‘Spring’, ‘Summer’, and ‘Fall’) because of the pacing, cliffhangers, and questions still lingering after ‘Fall’.

Lorelai Gilmore is waiting to greet her daughter, who is home for a day after traveling for weeks. I was excited; this was it; this was the beginning of a whole new obsession. As the episode goes on, you are reintroduced to beloved characters and some new, interesting faces.

I enjoyed seeing my favorite characters: Luke, Lorelai, Rory, Miss Patty; Paul Anka (the dog), Logan, Michel, and others. It was also funny to see cameos from some of Lauren Graham’s (Lorelai Gilmore) celebrity friends from Parenthood–I hadn’t watched the show so I didn’t know they were cameos until people online started pointing them out–and how the characters had progressed over the years.

I loved getting to see This is Us’s Milo Ventimiglia, Jess, who is a love interest of Rory Gilmore. His character has grown up from his bad boy ways and surprised me, mainly, by his facial hair. To my disappointment, Melissa McCarthy (Lorelai’s chef best friend named Sookie St. James) was not able to come back to the show until the last episode, but I am thrilled that I got to see her.

It was cool to see the new faces, too. The show supplies two openly gay characters–shown on screen–, one of which is brand new to the show. Donald, a Stars Hollow resident, is one of these homosexual characters. A few other LGBT+ characters are mentioned in one of the episodes. This is a huge change for the show because the original did not include ‘out’ characters and several unkind comments towards the LGBT+ community. It is good to see they are progressing even though it is slowly.

Paul is a new character that is literally forgettable. He is Rory’s boyfriend, and no one seems to remember how he looks or anything he tells them. The only reason I remember him is because he is so forgettable. Poor Paul. We do not even get his last name throughout the miniseries.

But in some ways I was disappointed in the revival. I mean besides being only four episodes long. One scene has Rory and Lorelai at a pool basically making fun of heavyset people in bathing suits–degrading a lot of the United States population and some of the fans themselves.

I realize that the producers had to get everything together within the miniseries, but there were scenes that were too rushed for the scenarios.

There is also Rory’s storyline. I like how relatable she seems to be with her problems as a struggling and unemployed thirty-two year old, but the way she goes about the things in her life is a little disconcerting. It is usual for people to be in rough spots in life and drown in their sorrows; however, Rory looks to everyone for relief and the character does actions that are not anything close to the original character’s personality. Also, Lorelai’s initial reaction to Rory’s solution is depressing.

And Lorelai has everything she has ever wanted and messes up once in front of her mother and guests, turning her into an absolute hot mess. But it’s okay because she fixes herself in a magical Lorelai way and everything turns out fine.