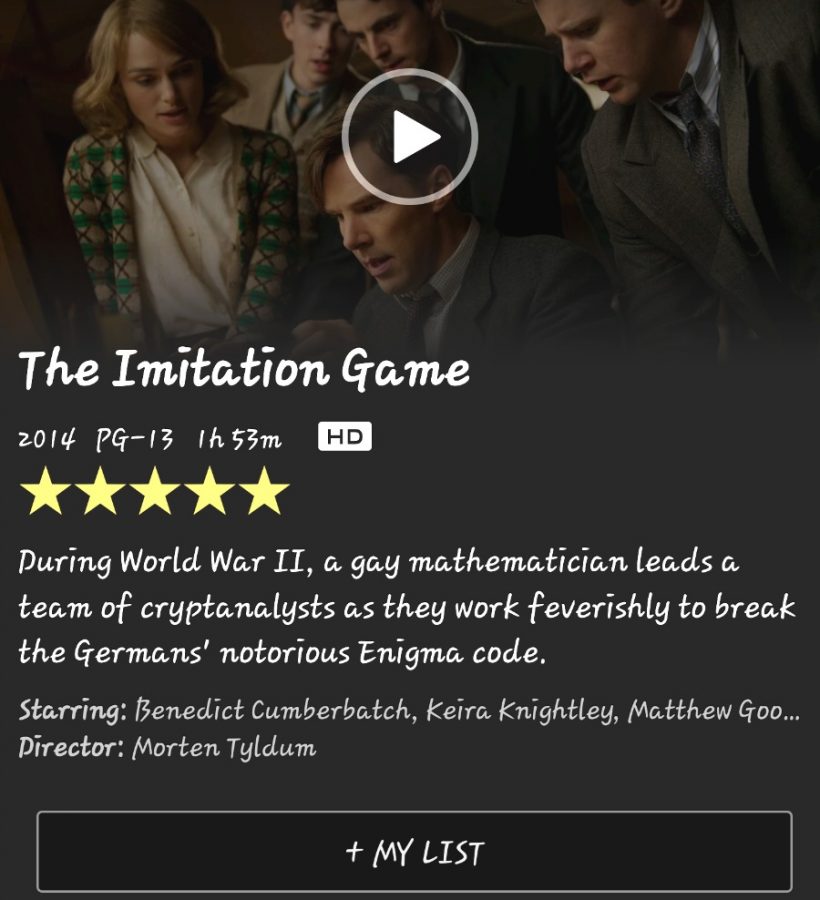 Netflix page for 'The Imitation Game'.

Movies can interestingly show the accounts of the past and blow us into the future or pop us right into a fictional fairytale. With screenwriters being inspired by other writers and learning how to invoke the emotions of their watchers and listeners, movies have gotten better.

Around two years ago, a movie starring Benedict Cumberbatch came out. It was titled The Imitation Game and depicted a true story of an intelligent mathematician who was involved in the decryption of the German Enigma machine. Unfortunately, things after the war do not go up for Alan Turing, played by Cumberbatch. He was taken into custody and given medicine to take. A year after his arrest, he dies.

I loved the movie. It was a nice mix of intellectual conversations and plot twisting action. It put perspective to World War II for me and I now better understand everything going on during the war. It may have even turned my negativity towards history into positivity.

There was female empowerment with the side character, Joan Clarke. I like how easy going she is with the project and how accepting she is of Alan. She looks to Alan as an equal and vise versa. The rest of the cast and characters were equally enjoyable.

I do wish there was some extra element to the story. I am not quite sure that the movie ended with a knowledgeable message besides ‘here are some cool people and here is what they have done.’ I believe media such as movies, books, and music need to have some overall message to make it memorable and inspiring, but the producers of The Imitation Game did do a great job of inspiring and fascinating me by Alan Turing’s life story. Go give it a watch.