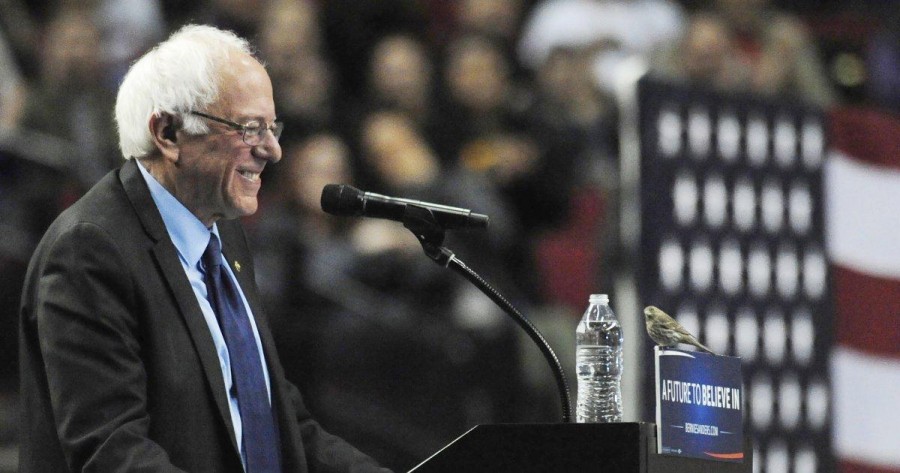 Bernie Sanders is one of the main politicians running for president this year; he’s democratic/socialist and the majority of America’s youth is supporting him. This easily makes him the internet’s favorite presidential candidate, due to the abundance of young adults using social media and other internet platforms. People are making memes comparing him, Clinton, and Trump, and are usually in favor of Sanders. One event at one of his rallies in Portland, Oregon has proven that even further.

On March 25th, Sanders was speaking at a rally, and a small bird happened to land on the stage. He pointed out the bird, and just as he did, the bird flew up to the very edge of the podium and landed on it. His supporters at the rally went wild- people stood up, cheering and yelling, over a little bird.

After the video of the bird landing on the podium was uploaded, it immediately went viral and took the internet by storm. It started trending on Twitter very soon after, and did for many days after the event. People started making memes and video edits for comedic reasons. One photo even compared a photo of an eagle attacking Donald Trump versus the photo of Bernie Sanders smiling at the bird, saying “The birds have spoken”.

Brittany Mayfield (10), an avid internet user, said she first heard about “Birdie Sanders” on a social media website. “People were making memes and funny photos of it. The internet will make memes out of anything,” she said. Mayfield said “everything is so planned out and fake in today’s politics, so it’s nice and entertaining to see something not planned out, and to see a politician’s true, genuine reaction to something. The election has been so harsh this year, and it’s cool to see something light and funny happen.”

The presence of social media and the internet has had a great impact on the election this year. It has definitely varied from the rest, and we can definitely expect the elections to differ for years to come.