What is Senioritis, Really? 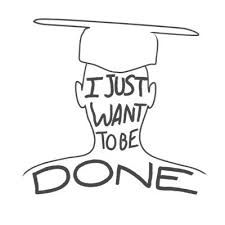 I’m absolutely certain that everyone at Lenoir City High School has heard of the infamous ailment “senioritis.”

However, most people think senioritis is simply just hating school and not wanting to be there.

Merriam Webster defines it as “An ebbing of motivation and effort by school seniors as evidenced by tardiness, absences, and lower grades.”

Wikipedia explains it by saying, “Senioritis is a colloquial term mainly used in the United States and Canada to describe the decreased motivation toward studies displayed by students who are nearing the end of their high school, college, and graduate school careers.”

Most websites seem to believe it is just a lack of motivation, more absences, lower grades, etc., but why do they think this?

The fact is that senioritis is a real thing (it’s even a real word). It’s more than just an excuse for seniors to not do their work. When you get so close to the end, you’re just ready. You count down the days and you picture yourself walking across the stage to pick up your diploma.

It’s almost painful to be stuck in a high school building when you can see the end so close. You’re so tired of being surrounded by drama and people who don’t care. You’re aching for it to just be over already. You know it may be a little hard to move away from your friends and not see them every single day, but you know you’ll keep in touch with the ones who really care.

“Senioritis is not being apathetic about being at school. It’s being so ready for the next part of your life that everything else is put on the back burner,” explained Andy Thornton (12).

When you’re just a couple months away, you have a picture in your head about what your future is going to be like, and it’s incredible. You can see so clearly the place you want to be and what it’ll be like to be an independent adult and make your own decisions regarding your life.

Senioritis gets to the best of us. It’s a curse, but it happens to everyone. There’s no avoiding it.