One class, one big difference 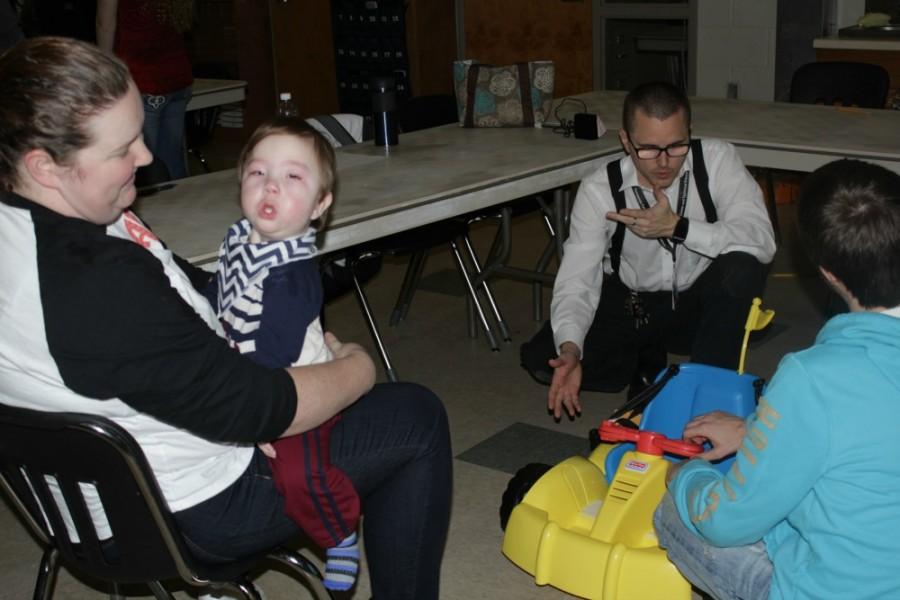 Ms. Crabtree, her husband, Mr. Smith, and Elliot Crabtree get ready to test out a toy car designed by the Senior Engineering Design that could make a huge difference in Elliot's life.

Students often question the purpose of their classes–the all-consuming, subconscious, “When will I ever use this,” drowning out the passion for studying. If you cut the corner in the F-wing and find yourself in front of Senior Engineering and Design teacher Mr. Smith’s classroom, you might here the whir of a toy car motor and the laughter of a child. This child is Elliot Crabtree, son of LCHS English teacher, Mrs. Crabtree.

17 month-old Elliot is just like any other child his age—he wants to grab his mother’s smartphone; he giggles when he’s swung through the air in his father’s arms; and he’s cranky when he misses nap time. However, Elliot was born with a physical disability called Arthrogryposis. Basically, when he was born he had contractures of the joints, which causes limited mobility, and he has low muscle tone. Affecting everything from swallowing to lifting his arms, Elliot faces many challenges on a day to day basis.

Earlier in the year, Crabtree had heard of The Little Tennessee Education Foundation and applied for a grant they were offering. Crabtree was chosen one of about six kids in the county that applied. “I didn’t even know that they were doing it at the high school,” said Crabtree, “a lot of the students creating it are actually my previous students.

“I wish I could say [the idea to build Elliot a car] was my idea, but it was a lady named Janet Reese who came to me, because she knew we had the engineering program, and offered to let us on board. So they pay for the equipment and we just bring the labor and the engineering know how to get the job done,” said Smith. The car not only will be something for Elliot to enjoy, but something to give him freedom. “[This] is to help Elliot gain more mobility because of his physical disability but it’s also going to be therapeutic because it’ll make him do certain motions that help trigger his muscles,” said Crabtree.

The room full of young engineers spent the day taking measurements, testing, and trying to come up with ideas to make Elliot’s car function the best for him. Currently, the main roadblock in the way of the final product is the steerage of his car. Smith and his young engineers threw around some different ideas the day of the fitting. So far, the car is fully equipped with a velcro gas pedal—so that Elliot can switch which foot he accelerates with— and a five point harness to keep in secured in the car when he operates it with. All of these ideas were ideas of the student engineers, and all of the products (i.e. the five point harness) were student made. “These are all students who have had three or more engineering classes already. So they’re using what they learned foundationally in those classes in order to redesign the car. We’ve done a lot of cool projects in the past including this year but we’ve never done a project that made a difference in someone’s life and really help someone develop as a human being. This is a project that has a weight and significance and meaning to it. Engineering affects everyone’s lives—it can have a huge impact on the world,” said Smith.

The roles on the project switch every week. Every week there’s a project manager and nearly two students on each aspect to tackle about the car. Keely Buttram (12) was the last project manager. “I think as a whole class it’s just been really fun because we know that overall it’s going to have a great impact in a life, and it’s helping us have experience working on a physical engineering project instead of just taking notes,” said Buttram.

The real world experience for the engineering students has been a unique process for Smith and his students alike. Due to the real world aspect, there’s no definitive “last day” for the project—a real engineering breakthrough must happen for the car to be finished.

“For us, this means even though [Elliot might not walk] until at best four or five years old, this means he has more freedom, more mobility, and a sense of normalcy,” said Crabtree. The engineering project not only is an example of a real life application of engineering, but also a small motion towards students becoming more involved in helping their communities and using their skills to give back—a trend that will hopefully gather more momentum in years soon to come.