A Week in the Life 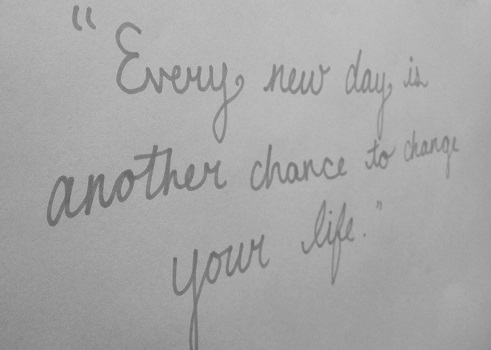 Sometimes the world just seems to work against you. Things get weird and crazy in a matter of seconds–things happen that you never saw coming. Your perspective of the world changes in the blink of an eye.

In the past week, my world was nearly turned upside down.

I went to Tennessee Tech Thursday afternoon for a band clinic. My audition was Thursday night, and then Friday morning I received a text that one of my best friends had ran his car into a ditch due to the bad weather. I was a little freaked out, to say the least. How easily could it have been another car he slammed into?

I was so thankful he was safe, and tried my best to continue through the clinic as normal. I got home late Saturday night only to get a text from a different friend asking if I was free to talk. Exhausted and a little on edge from the recent incident, I texted back and let her know I was available.

She told me about how she had been driving home from work just an hour or so before. This girl was driving on Highway 321 going about eighty miles an hour, and someone was driving on the wrong side of the road, also going eighty, straight at her. She told me she had been on the phone with her friends at the time, and she just screamed for about thirty seconds straight. It was a traumatizing experience for her, but one that definitely made her look at the world a little differently.

I, too, began to look at the fragility of life a little more than before. I stayed up one night and just cried, thinking about how easily her name could have been read off by teachers during first block, telling us that she passed away over the weekend. That was one of the most terrifying thoughts I could ever imagine. I just couldn’t picture the world without her pretty face in it.

Tuesday morning I came to class, a little distraught because of the past events of the weekend. A friend asked how one of my other best friends was doing, and I just looked at her and said, “What?”

She looked at me a little oddly and asked if I knew he was in the hospital. My heart sunk in my chest. I was scared and confused.

He had gotten a basketball injury over the weekend and his lung partially collapsed. He had a tube put in his lung to drain excess fluid, and was weak, but recovering. I visited him a few days later, and my heart filled up with love, happiness, and relief as I saw him. There’s really no explaining the incredible feeling I had knowing he was safe.

Three of my closest friends had been in serious situations in less than a week. Actually, it was about a three or four day period in which these events occurred. My world could have been entirely turned upside down in just a matter of days. Seventy-two hours.

Your friends are not something to take for granted. They are a gift, a blessing, and you could lose them at any given moment. Cherish them and love them with everything that you have, because you never know when they will be gone.

Life is incredibly fragile–it’s delicate and can be taken from us any time. That’s something we all need to realize before it’s too late.