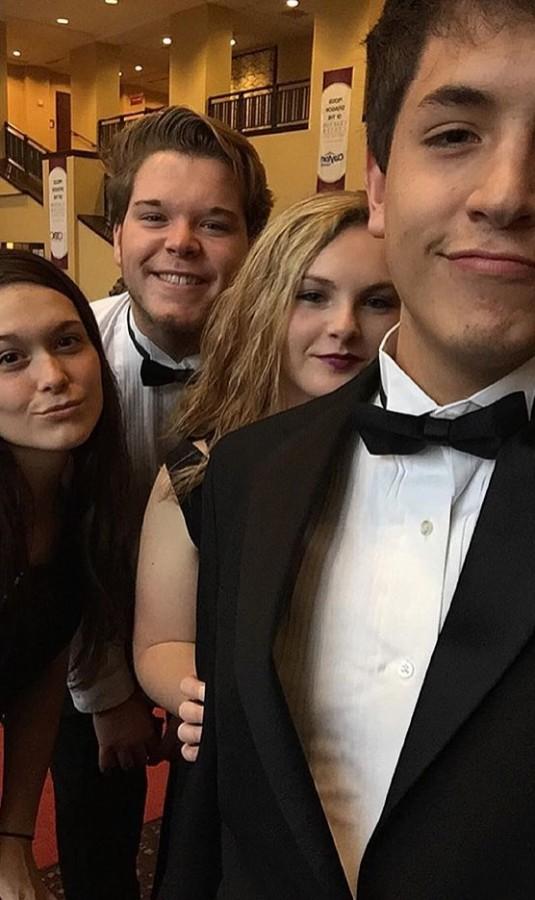 From left to right. Gracie Newbold, Matt Hamilton, Carly Minor, and Dakota Howard get ready for their performance with a selfie.

On Saturday 7, 2015, the Lenoir City Singers received an invitation to sing at Maryville College in front of many different choirs–even the Marville singers.

Mr. Cross wanted everyone there at 2:45 p.m. so that the Singers would have a little bit of time to hangout and relax before rehearsal.
Seniors from Maryville as tour guides for the Singers and showed them around the building. When everybody got there, the tour guides took them to their dressing room to drop off their clothes.

Both guys and girls had the same dressing room, so it was a little problematic. After the dressing room problem taken care of, the Maryville Singers took LCHS’ Singers to practice on stage.

When the Singers took the stage, the Maryville Singers showed them how to enter stage and exit. Mr. Cross positioned us so that his Singers could see him when he was directing. The Singers ran through all three of their songs, and made some necessary changes.

With a short amount of time to rehearse, they made the adjustments needed and left. After a 30 minute rehearsal on the big stage, the Singers felt confidence in their performance.

With an hour break to rest and eat, the Singers were back in the auditorium at 5 p.m. to put the final touches on their performance. There were eight different choirs there–it took a little bit of time to get everyone on the stage. The stage was packed, but our Singers made the best of it. We ran through that song one time and then we were all sent back to our seats.

The first choir got onto the stage and started to perform. Before their second song, we got up to go get ready to sing. For some of the students, like myself, it was their first time ever performing at Maryville so it could be a little bit scary. But for Carly Minor (10) she was not scared, but excited instead.

“I was excited because singing is what I love to do most. Getting to sing with everyone in singers is so fun and we sound so great as a group.” Said Minor

The Singers killed it, and walked off stage. Mr. Cross congratulated them and told them good job.. After watching a couple of the other choirs, the time had arrived for the Singers to go back up on the stage and sing together once again. All eight of the choirs sang together as one for an amazing sound.

“It was a really cool experience. It was interesting to see all of the other schools perform. I liked seeing what all the other choirs were working on & where we were in comparison to similar choirs  in other counties.” Said Gracie Newbold (10)

The Lenoir City High School Singers had an amazing opportunity to sing at Maryville college and that gave incredible experience to everyone.