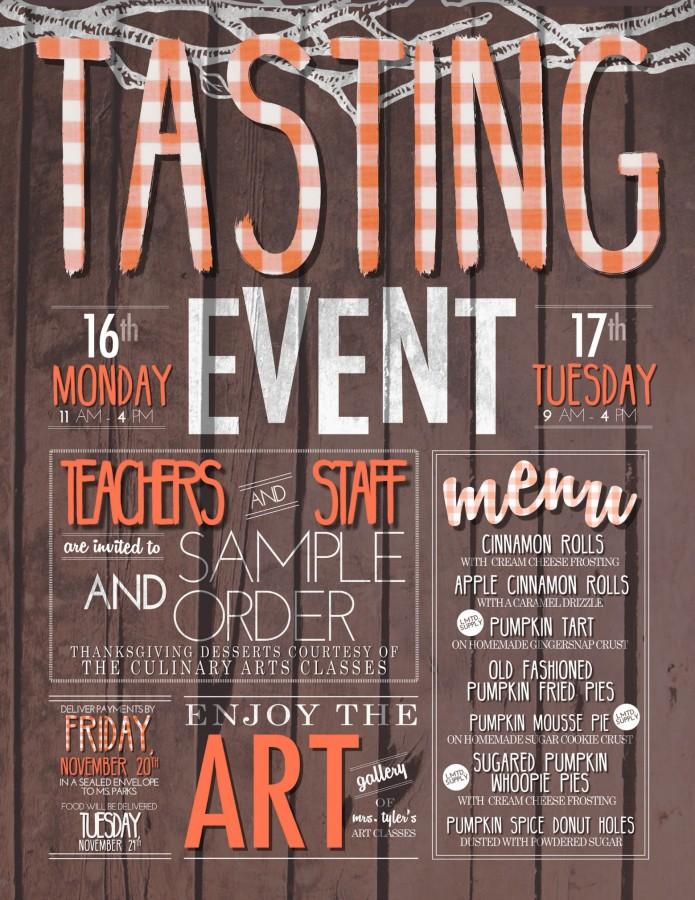 The Flyer for the Tasting of the food made by Culinary Arts. Designed by Holly Thompson

Lenoir City High School’s new Culinary Arts Program has made large strides past where it was when it started last year. Not only do they finally have a functioning kitchen where they can cook, but they have approval to sell anything they make (within the district guideline, of course), and Mrs. Parks is taking full advantage of both.

For Thanksgiving this year, the Culinary Arts program is selling seven food items including pumpkin donut holes, pumpkin tart, apple cinnamon rolls, regular cinnamon rolls, and fried pumpkin pies. The complete menu can be found at the bottom of this article.

November 16th and 17th are set aside for teachers to taste and order the various foods that will be prepared. Some foods, such as the pumpkin tart, will only have a certain number available to order due to the difficulty of making them. Others, such at the pumpkin donut holes, will be made to order.

Teachers have through November 20th to pay for their delicious treats. On that day, sales will be open to the entire student body. All deliveries will be made Tuesday, November 24th to make the food as fresh as possible for the teachers and their.

The Culinary Arts classes will begin test cooking each recipe this Wednesday, so that when the time comes to make them, they can put forth their best cooking.