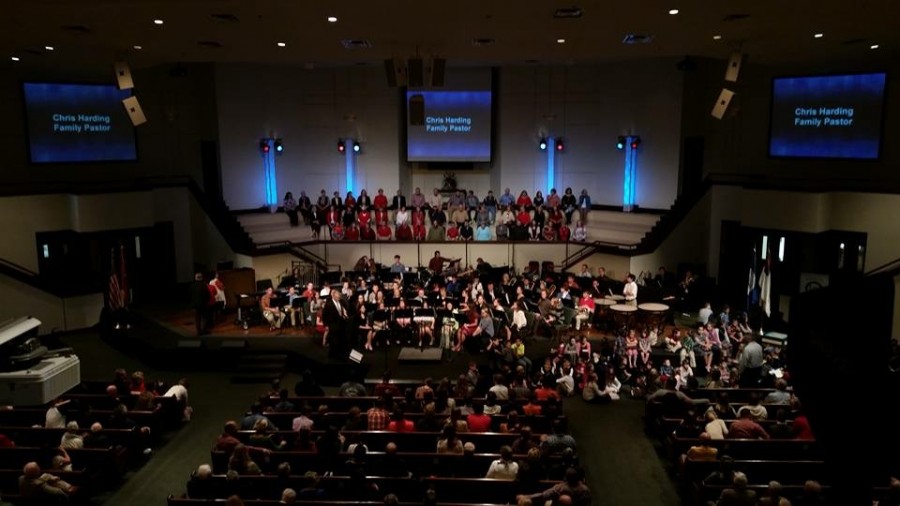 They invited the Lenoir City High School Band to join them for worship and praise. The band played the first movement of their halftime show in the balcony of the church, then joined the church’s orchestra to play through several patriotic pieces, including “America, the Beautiful” and “Salute to the Armed Forces.” They played a few other worship songs and then the church moved into their service.

A veteran from the Marines named Tim Lee was the guest speaker. He told about his life and about how he was a rebellious teenager who hated authority and went on to join the Marines. “Smart move on my part,” Lee joked. He served in Vietnam. There he stepped on a landmine and had his legs blown off. “My friends said it looked like someone had poured a five gallon bucket of red paint all over me,” Lee explained. “I should have died, but I prayed to God and told him if I could live, I would fix things and I would live my life to serve Him and His will,” Lee said.

After telling his story, he began to explain the Gospel. He asked how many people knew they would be going to heaven if they died in four minutes, and how many of those people had things they needed to fix with God. He went on to ask how many people did not know Jesus and asked several other questions.People raised their hands with their eyes closed in response to every question, and once he had finished asking all of these things, he asked the ones who raised their hands to come to the front and pray. Many people stepped down to the front.

After this, he began to pray over them, and prayed a prayer of salvation for anyone who had not been yet saved.“How many people prayed this prayer with me and meant it?” Lee asked, as everyone’s heads stayed down with their eyes closed.He counted the hands and with a teary voice said, “Thirteen people.”

Many people left the service that day with happy hearts and smiling faces, thrilled to see and meet their new brothers and sisters in Christ.