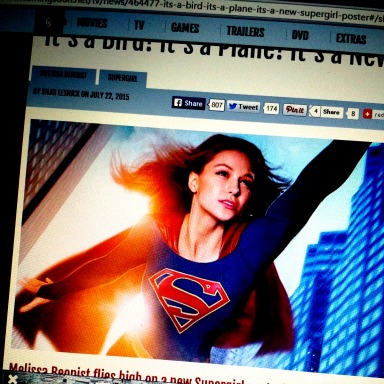 'Supergirl' on at 8 pm on Mondays. Be blown away.

Today’s television is usually filled with lead male characters that are the definition of jock with huge muscles and women swooning over them or the definition of nerd with a slim figures, glasses, and comic books lining his book shelves, covered in protective sleeves. I don’t know about you but I’m kind of tired of seeing men save the damsel in distress from fiery buildings or falls from great heights.

“My name is Kara Zor-El. 24 years ago, my planet, Krypton, was in serious peril. My cousin, Kal-El, was sent to a planet called Earth for his own safety and protection. You may know his story. The story you don’t know is that I was sent to protect him.”

Sure, I love me some Matthew Gubler on Wednesdays and watching Benedict Cumberbatch saving the world of weird cases, but I am grateful to the cast and directors of Supergirl for putting together an amazing pilot for the show.

“Things didn’t exactly go according to my mother’s plan. Krypton’s destruction sent a shockwave that knocked my pod off course and into the Phantom Zone. A region of space where time doesn’t pass. I slept there for 24 years until somehow I got here. When I arrived, I was still a 13-year-old girl. But in that same time, my cousin Kal-El had grown up and revealed himself to your world as Superman. The most powerful man in the universe. My cousin wanted me to have the same safe human-type childhood he did. So he placed me with my adoptive family, the Danvers. Scientists who once helped him understand his own super abilities.”

It starts with the backstory as does most superhero stories. You learn Supergirl’s name, Kara, how her planet was destroyed, how she’s related to Superman, and how her life is. I think it’s interesting how closely her and her cousin are. The fact that both their jobs due with media–though Kara has a lesser job in the Pilot as assistant to a wealthy and important business woman. They both save a plane as their first superhero task.

Then, hits the big event that shocks Kara to become a superhero: her Earth sister, Alex played by Chyler Leigh, is in a plane that is about to crash into the city. She hops up from her place in the restaurant (where her blind date left her at the table) and runs through alleyways, trying to reactivate her powers. She flies and saves the day. Later, her sister tells her not to try to save the world again, but Kara doesn’t listen to her.

“People of this city will die because something I did. I started this. You have to let me stop it.”

My favorite parts of the show was the hints at problems faced in today’s society. It highlights controversy with gender identities, racial separations, sexism, and sexuality. I think this is one of the only times on television that actually shows the issues that men think that women are homosexual when women aren’t into them and that superwomen are supposed to wear costumes that expose their skin and curves. Women have been named weak and damsels because the lack of female superheroes and female leads.

“And what do you think is so bad about ‘Girl?’ Huh? I’m a girl. And your boss, and powerful, and rich, and hot and smart. So if you perceive ‘Supergirl’ as anything less than excellent, isn’t the real problem you?”

I thoroughly enjoyed this show and hope to watch to the end of the series finale. I loved the acting and use of special features. It bashes what everyone thinks about women and stands out as something I know I will be obsessed for awhile.