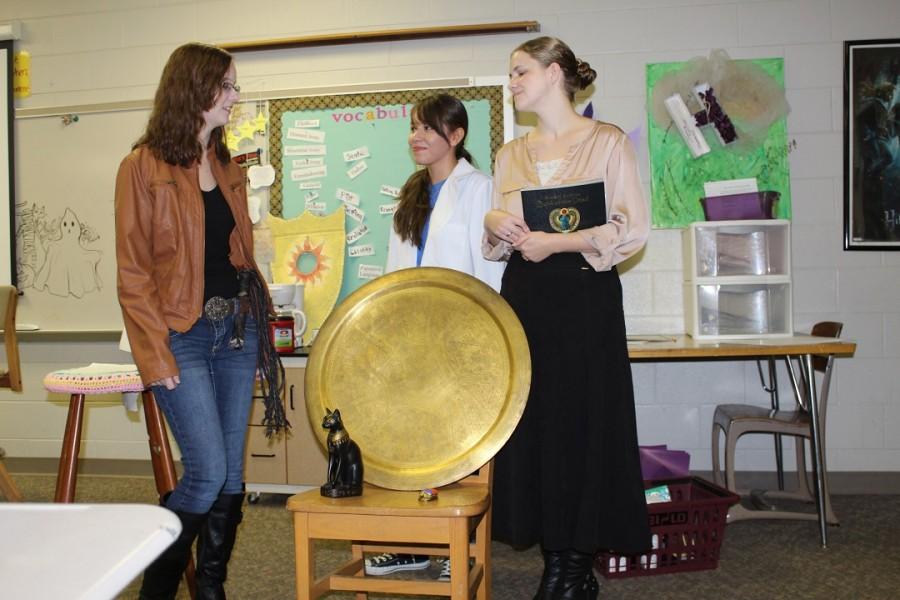 Geoffery Chaucer, a famous poet from the Middle Ages, wrote the famous satire “The Canterbury Tales” to make a commentary on society during his time.

Students in AP 12 have been reading these famous stories over the course of the month of October. From The Wife of Bath to The Knight’s Tale, they treaded through the rhyming couplets of Chaucer with zeal.

“I’m not a huge fan of poetry and whatnot but it was entertaining,” said Cameron Durfee (12)

A week ago, they were assigned a project that was most anticipated by a majority of the class: the Canterbury project.

The Canterbury project instructed students to create their own Canterbury prologue playing off of modern stereotypes and to artistically present it before their Class.

Durfee  got to portray some interesting characters in his group’s project.

“When I was a jock, I had to portray my more manly side–which I don’t show very often. I just brought that out. Dressing up in that fight scene and fighting with one of my friends is very different than I usually am,” said Durfee.

Durfee’s group–Nik Patel (12), Jenna Dirksen (12), Tyler Hoover (12), and Michael Guider (12)–took horror film archetypes (which include common stereotypes for general figures in society) and made a short film where they were all pitted against a masked villain.

However, not every group involved masked, ax wielding villains. Keeley Buttram (12), Lori Cole (12), and Alicia Ledesma’s (12) project took a much different approach. Their project followed a group of people (consisting of many but to name a few, a historian, tomb raider, and scientist) expedition to get to an Egyptian tomb to procure ancient treasures.

Drawing inspiration from the movie, The Mummy, the girls put their project together for some interesting results–even bringing in some actuals object from Egypt to highlight their theme.

The AP English 12 class took their opportunity to become Chaucer and ran with it as this year, students pushed boundaries (of appropriateness… and of creativity).
While characters differed greatly from Chaucer’s–no priests, parsons, or prioresses were to be found–the root of the themes were not all that different. People in society can be terrible, and sometimes it takes a few satirical rhyming couplets to open people’s eyes.