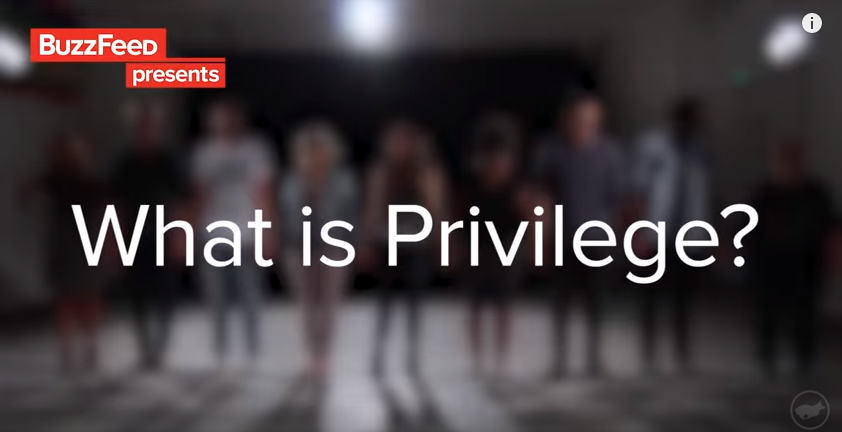 Title Screen of Buzzfeed's video "What Is Privilege?"

Privilege is not what many think about, and when they do they often feel like they are not privileged compared to others around them. However, what exactly is privilege? According to Google privilege is “A special right, advantage, or immunity granted or available only to a particular person or group of people.”

Telling someone what privilege is easy, showing it to them in a way they fully understand is hard.

If you are familiar with the social news and entertainment company Buzzfeed, you may have also seen one of their videos title “What Is Privilege?” In this video employees of Buzzfeed conduct an experiment to show what privilege looks like.

All of the employees start in the center of a room, with lines in front of them and behind them, and they either stay in their spot or move forward or backwards based on how they feel regarding a statement that is asked to them. The statement itself being something such as, “If you took out loans for your education take one step backward,” or, “If you get time off for your religious holidays, take one step forward.”

At the beginning of the experiment, many were joking around, but as the statements grew more personal and the gaps between people grew larger as well. The laughter died.

It showed the employees how privileged some of them were compared to their co-workers; a privilege many did not realise they even had.

Having watched this video myself I found it very inspiring and thought-provoking. It gave me a visual to look at and, as the video progressed, it made me starting thinking where would I be on these lines of privilege?

“I think it was really eye-opening. You go through your everyday life and you don’t notice; you just need an eye-opener,” Cirstea said.

It is something none of us truly deeply think about everyday of our lives. Most of the time we are not aware of the privilege we were born into.

When thinking about where she would be on the lines Cirstea says the middle.

“My parents weren’t born here and my mom had to work late at nights to support us, but because of that my life is easier,” Cirstea said.

When thinking about privilege, do we really understand what we have? If that is the case why did a video on YouTube about it get over million views, and over forty thousand likes? With people commenting about how they never saw it this way before?

The reason may be simple. We just don’t realise our privilege unless it is staring us in the face like in the video, or until it is gone.

Wanna check out the video mentioned? Click on the link below!

Sources: Buzzfeed’s video “What Is Privilege?”