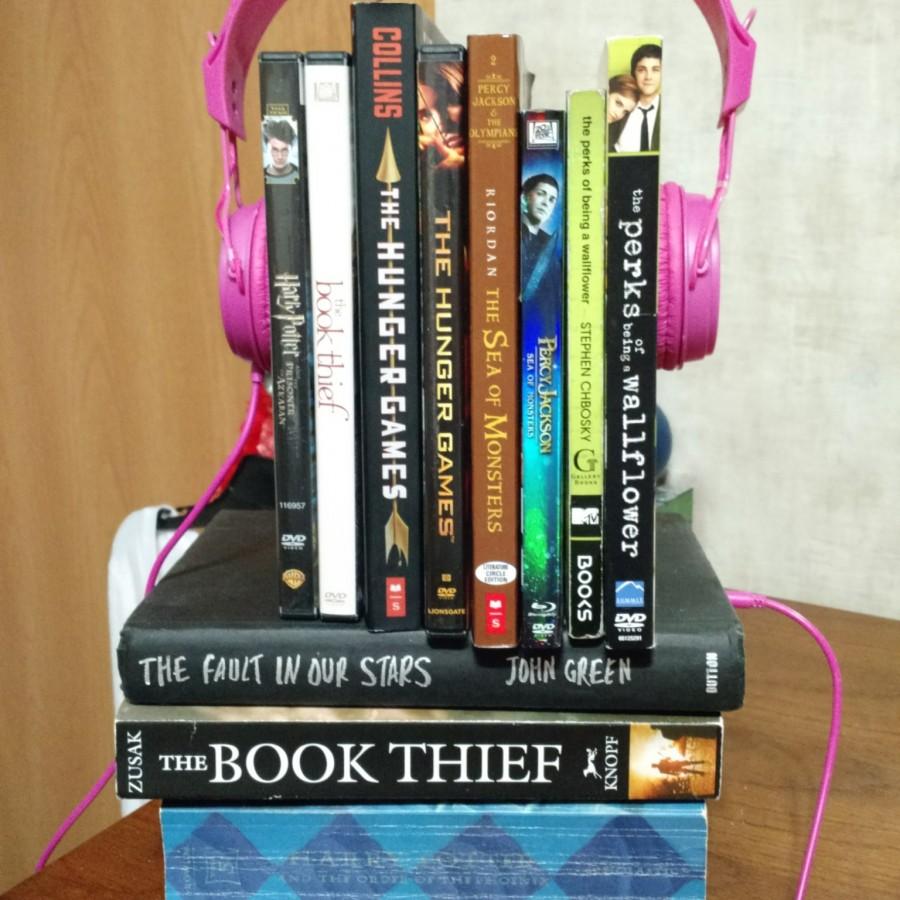 Some of the most popular books are judged by their movie counterparts, making it hard to expand the fanbases of the books. Movies get to expand merchandise and increase popularity and demand of the books. Sometimes the books are overlooked because the movies aren’t designed to cause a flare of excitement inside the watcher. Therefore, books are depleting in their reads. Prepare for spoilers!

Katniss Everdeen becomes the girl on fire and the symbol of rebellion in this series. She realizes that in order to save her family and district, she must save the world first.

The books tell more about how poor most of the districts are than the movies. In the movies, you only glimpse at all the starvation with scenes like the bread scene with Katniss and the filth that covers District Twelve and its inhabitants.

Like most movies, the adaptations have lots more depictions of action. In the books, you got a sense of secrecy, stealth, and strategy. This all is basically lost in the movies with big explosions and the fight scenes.

However, I really enjoyed how much the movies were like the books. You got a lot of scenes that were enjoyable in the book, which are infused with Jennifer Lawrence and the whole cast acting them out to make them seem more likable.

Liesel Meminger finds herself in the care of Rosa and Hans in a strict German society during Hitler’s reign. Her family ends up hiding a Jew and Liesel learns all about what is actually happening in the world.

The movies set life to the books. It included all details needed, except Death himself. The books have a narrator that is Death himself and he is looking back at Liesel’s life because they have met plenty of times. The movies seem to lose that idea and focus more on the plot, even though Death shows up a few times as a filler narrator.

I liked how alike the book and movie were. From the bombings to the book thievery, the movie contained most of the book.

When it comes to life, Mia Hall has it all: the perfect boyfriend, the coolest parents, a chance to be the best musician. All that is taken away from her by a snowy day and an innocent drive to see her grandparent’s.

Chloe Moretz is definitely the best actress for the role of Mia. She had me convinced that she was book Mia, that she was on the verge of death, and that she was this musical prodigy with a tragedy.

The movie didn’t really deviate from the book at all. It had the same characters, most of the same scenes, a lot of music involvement, and most of what was in the book. The only thing I would change is the news of Mia’s family’s deaths. I feel like they were downplayed and needed more emphasis. I think I was the only female in the movie theater who wasn’t crying (which is saying something because my sister did).

The Lightning Thief and Sea of Monsters

Percy Jackson has just discovered he is the son of Poseidon, which means great danger to him. Everyone is after him because he is a threat to both good and evil.

Where do I start? Either way, my opinion will disappoint some people.

The movies were good. It had enough action and romance to please me, but it wasn’t the movie adaptations just loosely based movies that took some ideas from the books. It seemed that the only thing they took from the movies of Greek Mythology and some of the character’s names.

In the books, Annabeth Chase’s hair is blonde and we don’t see a blonde Annabeth until Sea of Monsters, the second movie. And it’s just kind of like, “Oh look Annabeth dyed her hair blonde after The Lightning Thief”. Then, there is also the fact that Percy, Annabeth, and Grover are supposed to be twelve-year-olds and their actors look around eighteen or high school age. I suppose this would’ve been okay if the directors and scriptwriter actually read the books and made the movies more like the books. And, hello, where are those book scenes that made my middle school life better?

In my own opinion, if you take away your knowledge of the books, the movies are quite intriguing, but everyone who has read the books before they saw the movies all agree that if ratings of movies were based on their closeness to the actual content of the books, these two adaptations didn’t even get one star. I’m actually sad that we won’t get a chance to see how these directors try to redeem themselves in The Titan’s Curse and the rest of the movie series, but also happy that I won’t have to sit with my family a few more times and complain about everything that is wrong.

The Fault in Our Stars

Cancer sucks, especially when you have to spend your time with other cancer patients that have it worse than you while you listen to their optimism in the worst of times. That’s Hazel Lancaster’s life until she meets Augustus Waters, who makes cancer feel like less of a threat.

This is one of those movies where you don’t find enough things wrong with it to actually complain. The actors were great at their job. The people behind the making of the film worked hard to produce a lovely movie. Not only do you feel the emotion but you hear every boy in a one hundred foot radius trying to cover up their sobs. It’s pleasing to see Shailene Woodley, Ansel Elgort, and Nat Wolff make the movie binge worthy.

The only things I have to say that are negative about this adaptation is 1) I wish we got the deleted scene with John Green in the actual movie and not as a special feature and 2) I wish they added Kaitlyn even though she was very minor in the books.

He’s the “chosen one”, but he doesn’t know it until his eleventh birthday. Harry Potter is pulled into a world of fascination and witchcraft and wizardry after years of living under a roof with people who treat him like the scum on their shoes.

The movies were particularly spot on with the books. It’s usually really hard to start filming eight movies that are somewhat like the books. Especially when dealing with actual eleven-year-olds on set.

Though some things were off in the movies (Viktor Krum’s difficulty in saying Hermione’s name, Fleur Delacour’s annoyingness when she becomes a Weasley, and Arthur’s obsession with Muggles), I believe that these adaptations really spoke the words of J.K. Rowling. It helps that she was actually participating in production.

Let’s not forget, book readers, about that one scene in the Goblet of Fire movie when Dumbledore yells at Harry.

The Perks of Being a Wallflower

Charlie is the social outcast, the loner, the wallflower. Sam and Patrick befriend Charlie and offer him a chance to be part of all their shenanigans. Through the ups and downs in high school life, they stick together.

The movies did the books justice. Logan Lerman, Emma Watson, Ezra Miller and the rest of the cast really sold the characters. The plot was on point, the drama was perfect, and the intensity was nicely added in places it needed to be.
But the movie downplayed everything the book didn’t. In doing so, it makes the movie much more appropriate for young audience with the PG-13 rating and if it included more of the book’s concepts it would probably be rated R. I think it needed more though because it didn’t show how much all these things affected Charlie’s life.