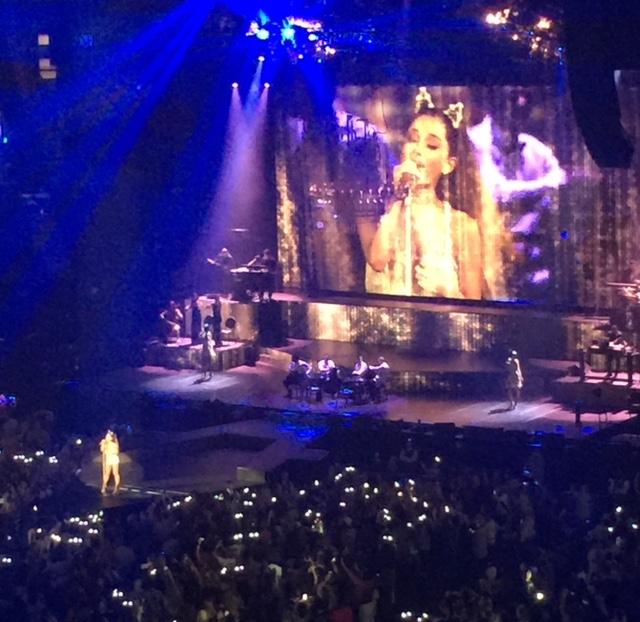 The tour consists of 88 shows, spanning from locations such as Barcelona, Paris, and Tokyo. On September 23rd  2015, Grande made a stop at Bridgestone Arena in Nashville, Tennessee, and I was exasperated to attend.

Two and half hours after departing from Lenoir City, I finally arrived at Bridgestone Arena where the performances started.

The concert opened with a group called Royal Crown singing snippets from their new album. After about an hour, the time finally arrived for Grande to come out. Grande performed 20 songs throughout the concert. Of these included Justin Beiber’s What Do You Mean and 3 songs from her first studio album Yours Truly. She opened with  Bang Bang and closed with Problem, these songs provided familiarity for fans as they are her most successful tracks.

The emotion was palpable amongst the crowd from the beginning. I was shaking and hyperventilating as I tried to take in the surreal moment of watching Grande,who is my favorite artist, perform in real life.

Her vocals were crisp, clear, raw and more impressive than her studio vocals. She included the addition of an audio clip with content that contained a conversation she had with her grandfather before he passed. He encouraged her telling her to “never let anyone intimidate her.” Grande’s style and presence allowed a different vibe to come through that cannot be experienced in any other live artist.

“I’ve only been to one concert before Ariana’s and that was a Fleetwood Mac concert. The Ariana Grande concert was completely different. The crowd was so diverse. People were dancing and singing along with Ariana. It was an awesome experience I hope to have again someday”, said Emily Honea (12), who accompanied me.

I was very pleased by the concert. Everything was cohesive from the background graphics to the chandeliers  and dancing. Ariana’s euphoric voice and intense energy provided an unforgettable show.