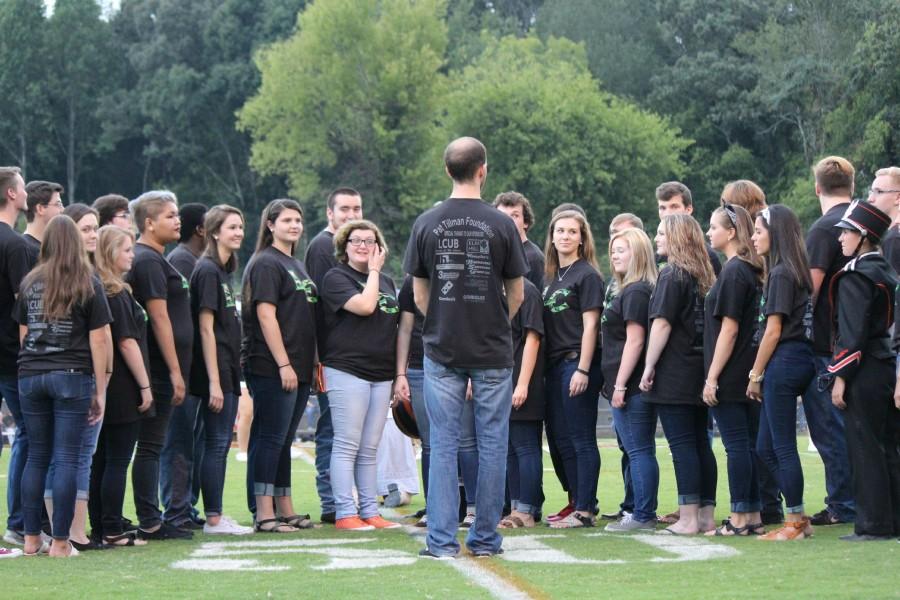 The Singers get ready to sing the National Anthem

September 11, 2015 was a day to remember for two reasons: the 14th anniversary of the Twin Towers being attacked, and the debut of the Singers now directed by Jordan Cross. Friday night the Singers got to sing the National Anthem for parents, grandparents, children, and football players.

Mr.Cross has worked with the Singers on the National Anthem since the beginning of the school year, and now we have almost perfected it. Like on any song, in the beginning there were some trouble spots for the new singers. Everyday we went through the song and ironed out some of the kinks to try to make it the best as possible.

The night of the football game, they had to be in the chorus room at 6:30 to hang around and relax before we performed. We ran through the song once and Mr.Cross’ wife, Jenny who is a music major as well, pointed out a minor spot that we needed to fix and he completely agreed! It was very interesting to have two people that know how to direct and give advice!

The singers were right behind the band as they played walking onto the football field. We went to the 50 yard line and got positioned. The cheerleaders and their “little sister” were spread out along the field. The cheerleaders had a kid from their camp that they did during the summer and part of that camp was the opportunity to cheer with the high school cheer team at one of the games! They did a cheer and then they did a moment of silence for the victims of the 911 attack. After the moment of silence there was a prayer, then we got to sing. I personally was super nervous walking out onto the field, but as soon as we started singing the nerves went away.

“I think we did a great job especially under the direction or a new conductor; he is doing a great job!” said Sheri Parker (12)

The National Anthem went extremely well, and we even got many compliments on a job well done! Then we quietly walked off the field and went back into the choir room and had a little celebration before everyone left to go to the game.

On Monday, everyone was still super excited about the singers singing at the game and Mr. Cross said that he got a multitude of compliments and congratulations!

“I was very proud of the singers and I feel like they represented LCHS very well. We look forward to singing at other athletic events!” said Mr. Cross