Mrs. Mousa's Spanish class enjoys some delicious salsa and learns in the process! 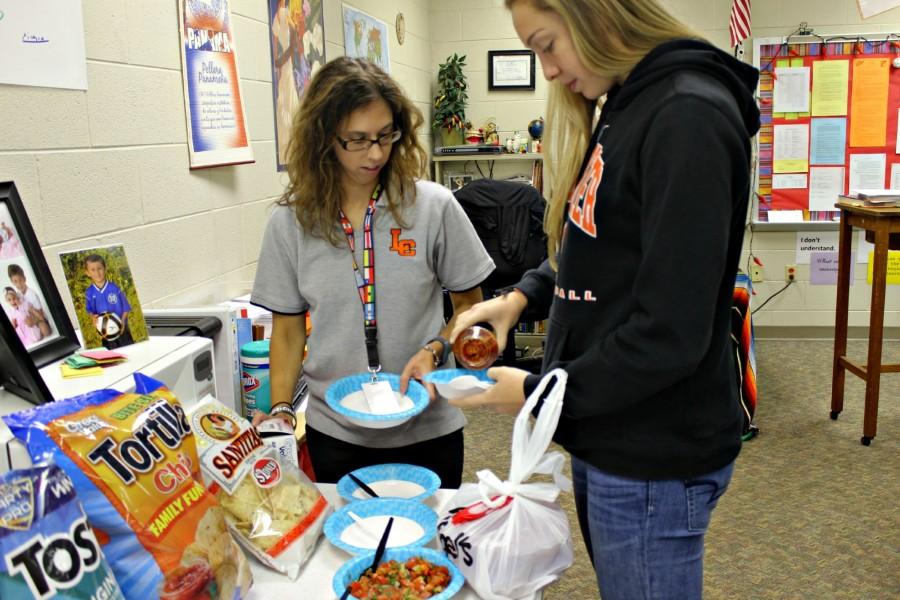 Mrs. Mousa and her 4th Block Peer tutor, Michaela McFalls, get the activity ready for the fourth block Spanish I students.

Learning a language is more than just learning that language’s alphabet, how to pronounce and write the words. It’s also learning about the customs, the holidays, the dialects, the culture behind the language, and a huge part of any culture, is their food.

One way that Mrs. Mousa, one of the three Spanish teachers at Lenoir City High School, teaches the culture to her students, is through activities with food. The particular activity she did on Thursday, September 17th, was with salsa.

Mousa had several of her students bring in homemade and/or store bought salsa, which she then put in bowls and numbered. None of the students were told before they tasted each salsa which was which.

After they tasted the salsa, each student was to list the ingredients they saw and/or tasted in each and to guess which ones were homemade and which were store bought, and before Mousa revealed which was which she had the class vote on which they liked best.

Mousa does this same activity every year with all her Spanish I classes (provided they are good in her class), and in the unit her classes are covering it talks about different foods and ingredients different Spanish speaking countries have access to.

For many students any time they are able to eat during class is a highlight of the day, and Mousa enjoys activities like this one just as much as the students.

“There are a lot of favorite parts [of the activity],” said Mousa, “I guess [my favorite] is that everyone participates and is excited to do it.”

While Mrs. Mousa likes that everyone is participating, the students like it for different reasons.
“[My favorite part was] the fact that I got to go first because I brought something in. Also, I was right about which ones were store bought and which were homemade” said Joshua Schuster, a sophomore in Mrs. Mousa’s third block Spanish one class.