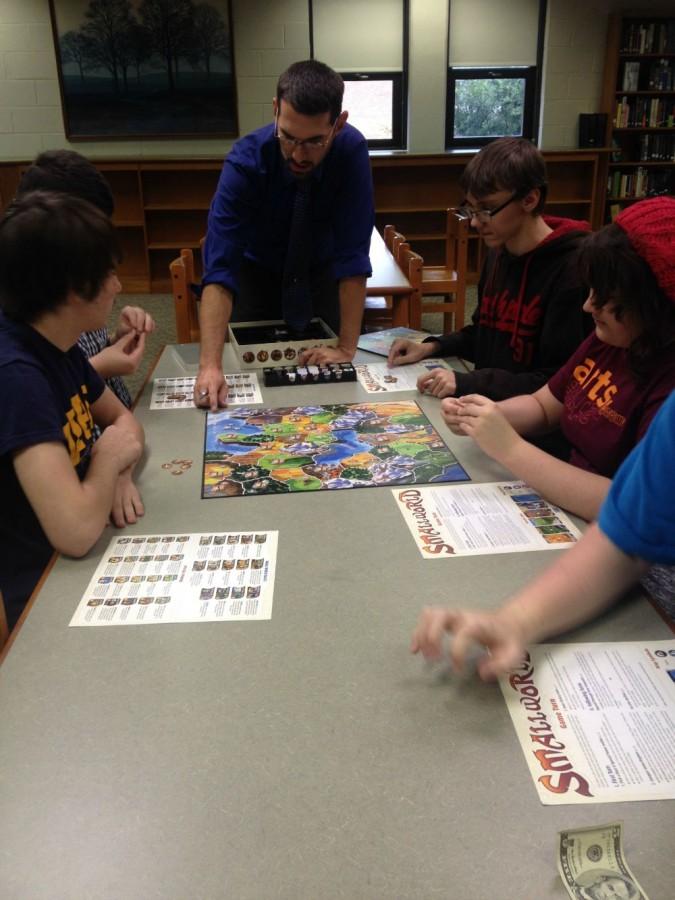 Mr. Johnston joins in on a game with the Strategy Club.

Clubs are a fantastic way to meet new people while doing what you love.

The Strategy Game Club is a wonderful example of this.

When you walk in, you can really see how much everyone enjoys being there–interacting with friends and playing games.

“The atmosphere is relaxed and fun. A lot of people are willing to teach others how to play, and even though people like winning, it’s not a super competitive environment,” said Mr. Johnston, the club’s sponsor and founder.

Everyone in the room seems to be friends with one another, as they laugh and joke around constantly.

“We play a variety of games and teach others to play the games, so they get both social interaction as well as enjoy the games,” said Blake Harold (12).

The Strategy Club was created in September 2014.

They meet on Mondays at 3:30 in the library, where around twenty-five students join together to play a multitude of board and card games.

They try to switch up the games they play each week, but the common favorite is a card game called Dominion. Some others include: Magic: The Gathering, Pandemic, Sequence, and Forbidden Island, along with plenty more.

Bailey Blevins (12) loves the club because he gets to spend time with his friends.

“I’m a huge nerd who loves to play all these games. I think these are good for your brain and teach problem-solving skills. I wouldn’t have created the club if I didn’t think they were helpful in some way. It’s a whole bunch of people getting together and doing the stuff we love doing,” said Johnston.

Why would he say to someone interested in joining the club?
“You just have to come because it’s awesome and fun.”