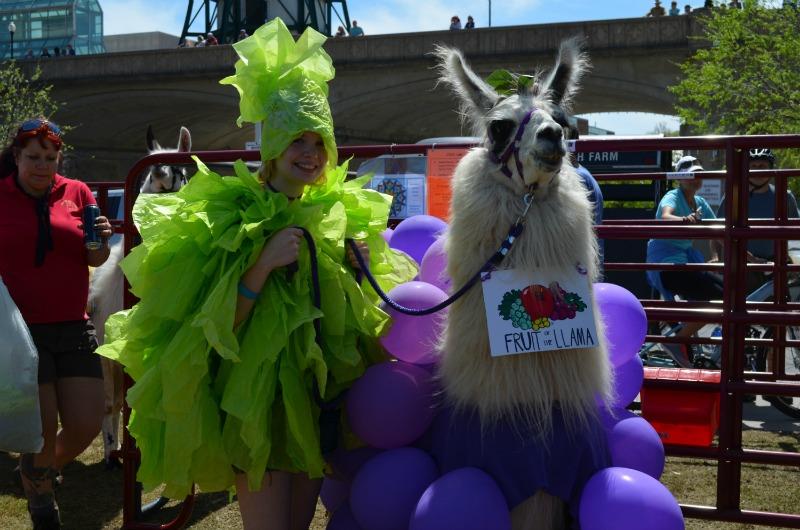 The great famed day finally came.  Last weekend, the weekend of April the 11th, Knoxville hosted its Second Annual Great Llama Race.  The same flawless, gorgeous spring weather thankfully made a reappearance on this glorious day; something different that happened this year, but not the last, was the entry of Lenoir City High School to the event.  Surprisingly, the school had beginner’s luck in the costume contest and in the race.

Sponsored by the LCHS Spanish club and the LCHS Knitting club, the event was much anticipated.  Knitting club was responsible for the outfit of the llama whilst Spanish club manned a booth that sold cascarones, Spanish candies, lemonade, and various sweets to raise money for the clubs.  The clubs worked to together to pull off a stunningly witty costume for the llama complete with a pun.

The llama, Pie, strutted sporting his white and black hair when the clubs arrived; honestly, he was the most attractive llama of the bunch. , Pie was shy but confident in his beauty.  The llama owners/handlers of Pie were very polite and helpful to the school as they frantically attempted to dress the llama and its walking partner, Jenna Dirksen (11).

“I really liked the llama’s attitude.  He had spunk, ya know? He was ready to do his own thing.  I was proud to match his costume,” said Jenna Dirksen recollecting the parade.

Kiyah Moore (11) comments on the stress of dressing Dirksen, “I felt my pulse in my big toes!  I was so nervous that the judges would come by while I was adding tissue paper to Jenna’s costume!”

Dirksen was a leaf and Pie was a bunch or concord red grapes.  The thought was to go off of the “Fruit of the Loom”  underwear brand, and dress the llama and its walker in the fruit costumes that are featured on the “Fruit of the Loom” commercials.  Pie was beautiful–draped in pearly purple balloons and sporting a sign around his neck called, “Fruit of the Llama,” Pie was a sight to see.  Overall, Lenoir City won second in the llama costume contest.  First place was a Teenage Mutant Ninja Turtle themed llama.  The costume won three hundred dollars for the school clubs.

The celebrity runner for LCHS was a Hard Knox Roller Derby girl.  She was extremely nice, and had a lot of spunk;  unfortunately not enough to hold on to Pie.  He ran vibrantly with the other llamas to the finish line where he disconnected with the celebrity runner.  Unfortunately, LCHS did not place in our heat, but there were no sad faces on their faces.