The defeat of the wheat

Whole grain biscuits get taken off of LCHS's menu 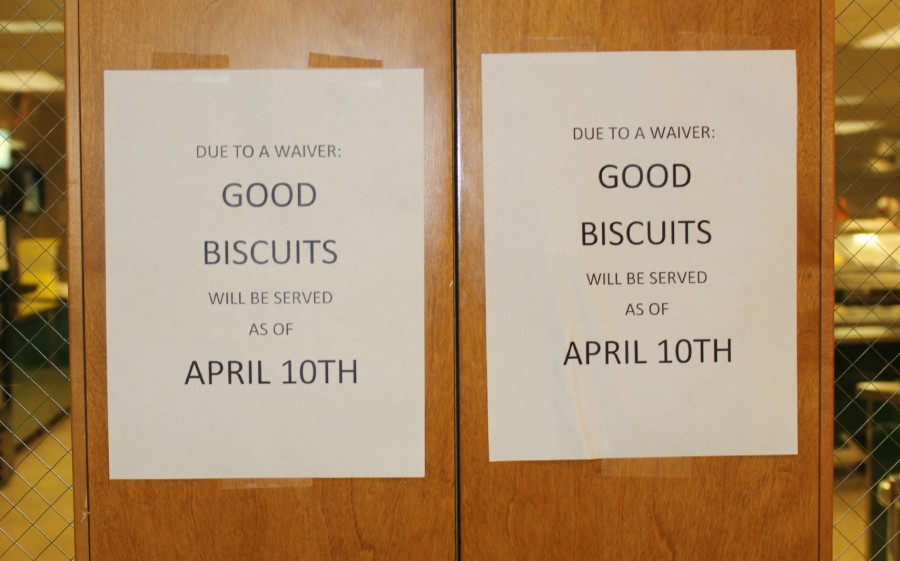 The cafeteria raises the hype for the biscuits

Biscuits, the choice bread of the South, have recently sported a new flavor and color in Lenoir City High School and schools across America. The Healthy Hunger Free Kids act that was federally put into play at the start of this school year has impacted millions of students across America who now are questioning where their favorite lunchtime foods have ran off to.

The changes were evident at the beginning of the year with the omitting of salt from the cafeteria line, absence of LCHS’s vast array of candy within the vending machines, and, most of all, the whole grain biscuits that were lined up on Fridays for what formerly was biscuits and gravy day (now whole grain biscuit, chicken, and sausage).

The whole grain biscuits were a peculiar thing to LCHS’s students, as many had never seen OR heard of a “whole grain biscuit”. Naturally, there was outrage. Threats of petitions, boycotts, ran rampant (all in good humor).

Kay Bailey has served as the Food Service Super Visor for Lenoir City School for nearly 20 years, and has seen the changes that have gradually occurred over time.

However, Bailey says that the most dramatic change in the lunch menu occurred last year with the federal act.

“This current school year, they changed the whole grain restriction to 100% of the grain items that we serve had to be considered whole grain,” said Bailey.

This restriction directly affected the biscuits.

The student population was nothing short of devastated.

Little do students know, the cafeteria is self-funded and runs on a budget of about a million dollars a year, and student purchases affect their earnings. They don’t receive tax money or local funding. This year, with all the dramatic changes in the menu and the many days missed due to snow, the cafeteria has lost a lot of money.

Districts have been monitoring the consumption of the new foods. Bailey shares that most have been fine, but some food items were not.

Bailey shared that most specifically, biscuit sales were down.

“When we went back and collected the information and it was very dramatic [with the biscuits] here at the high school…Last school year on Fridays we were averaging 312 biscuits a day…This year we changed to the whole grain biscuits it dropped to  153,” she said.

The USDA noticed this problem in many of America’s schools.

And then, a miracle happened.

“In section 751 of the Consolidated and Further Continuing Appropriations Act, 2015 (Public Law 113-235), Congress directed the Secretary of Agriculture to allow State agencies that administer the National School Lunch Program (NSLP) and School Breakfast Program (SBP) to grant an exemption from the regulatory whole grain-rich requirement in the meal program…” stated the USDA’s memo February 10th of this year.

This means that each state could waive items they weren’t selling, and for LCHS, that meant biscuits.

“They’re…edible. But that would not be what I would pick,” said Bailey.

Surprisingly, the middle school and elementary school haven’t complained as much.

As for any other items being waived, Bailey had requested regular cobbler dough for pot pies, cobblers, etc.

So on Friday, April 10th, expect to see an old friend at the hot bars for breakfast.

The wheat has been defeated.