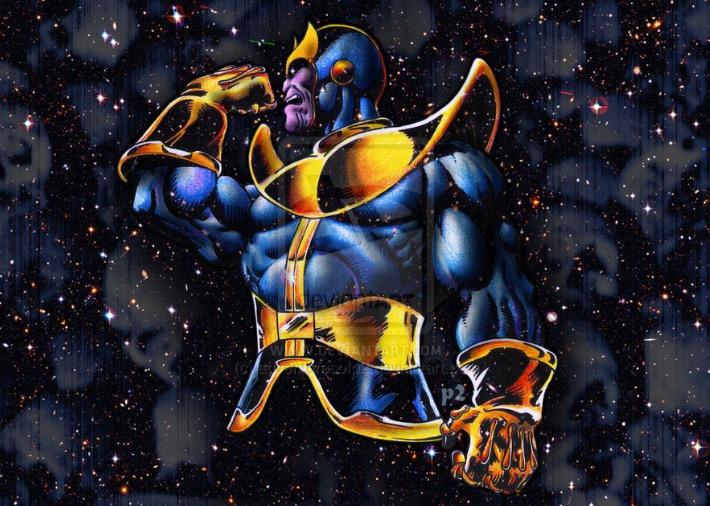 At the end of Marvel’s The Avengers, Thanos was revealed, but who is Thanos? Why is he so important? What does he want? Why did he control Loki and Ronan? Many comic fans know all these answers, but to the common moviegoer, these answers are not so obvious. This article is for those of you who are unacquainted with the Tyrant of Titan.

A movie-goer and comics fan, Taylor Shultz, says, “He’s an alien, who is although superior in intelligence and strength, is no match for the Marvel Universe’s heroes.”

The heroes will always win, but one must explore what make a villain such a formidable foe.

Thanos is the Mad Titan, the last of his race, and wanted across the universe for the many atrocities he’s committed. He came from a race that looked just like humans, but he was a mutant of his kind. When he was born, his mother screamed not in pain, but at the sight of her son. She was afraid of him; she saw a monster and knew he would become one.

After Thanos’ mother was institutionalized, his father, one of the foremost scientists of the planet, raised him on his own. Thanos learned very quickly, surpassing his classmates and teachers in knowledge, thanks to his father. As often happens with such prodigies, he was bullied, which caused him to skip class one day.

That day he met the love of his life. He met a girl that encouraged him in his quest for knowledge. When she liked him, he gained confidence and made friends for the first time.

For the first time, Thanos had friends. He played games and had fun with them. One day, he and his friends went out to play and explore in the caves outside the city. As Thanos wandered off to explore by himself, he got lost. Searching for a his friends and a way out, he found lizards that he believes would lead him out of the caves, but all they did was lead them to his friends’ bodies, which they were consuming.

When Thanos had finally found his way out, he did not tell of his “adventure,” but the bodies were found, and rumors very similar to the truth began to circulate. The distraught Thanos became angry with the lizards, with people, and everything.

To cope with his anger and to search for knowledge he began to catch and dissect the lizards. Then he went on to catch and dissect cave-apes. He’d catch more and more creatures, and not find the answers he was looking for. He didn’t even know his questions. He needed answers, and nothing would give it to him.

So he began looking in people. His classmates. He cut them up, and committed the first murders in millennia on his planet. And his beloved continued to urge him to do it.

In his quest for his answers he never found the answers he was looking for. Not in the results, not in the anatomies, not in the screams of his victims. As he grew older, he continued his experiments and when he still couldn’t find his answers, he made up his mind to leave the planet.

He became a pirate and quickly rose through the ranks. Even though he was a genius, he still wasn’t in charge, so he made it happen. The captain of the vessel was a cruel captain and the crew turned against him at the promise of more wealth and greater shares.

So Thanos killed the captain and anyone who opposed him and took command of the ship. Under Thanos, the crew grew. They earned more money. They gained more ships. They pillaged and plundered entire worlds, slaughtering everyone and everything in their wake at Thanos’ command.

Wherever Thanos went, so did the girl he had fallen in love with. She promised that once Thanos had accomplished enough, she would marry him. World after world was slaughtered. Trillions upon trillions died, but it was never enough. Thanos became angry, and his crew often saw him muttering to himself.

On one world, a lone survivor came to plead for his life with Thanos. He asked Thanos for his life. Thanos told him to go aboard the ship and to enter his quarters. There, the survivor was to ask his lover if it was enough. The man entered, and lying on the bed was a body, dismembered and broken.

The man came back out, laughing, and asked Thanos if it was a joke. Thanos dragged the man inside and looked at the body. The man would not ask, so Thanos did. The man saw the body do nothing, it only lay there. Thanos saw the girl he had met while skipping class all those years ago.

She told Thanos that it was not enough.

The man perceived no one in the room but himself, Thanos, and the corpse. Thanos killed the man at the instruction of his love. He did it for the girl. She had told him once that if he killed enough, she would love him.

One day, Thanos realized he had never known the girls name, so he demanded she told him. At once he saw her clothes torn away and she had become a skeleton.

That day she revealed her name to Thanos, and her name was death. And he loved her.

Now Thanos is scourge of the universe, searching after the Infinity Stones, so that he can pursue his love of Death through the use of the Infinity Gauntlet.