Wincing on Winston: Why the Bucs 1st pick could be the franchise’s most important 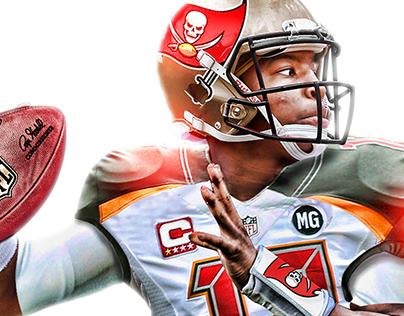 via College Spun (labelled for reuse)

When the 17th week of the 2014 NFL season came to a close, the 2-14 Tampa Bay Buccaneers were guaranteed the bittersweet 1st pick in the 2015 NFL Draft. At that time, the clear favorite to be selected was that season’s Heisman Trophy winner, Marcus Mariota, but since then, the ambiguity from Bucs’ GM Jason Licht and hints from head coach Lovie Smith have left fans and experts alike uncertain. “This is the most important pick, potentially, in the history or the franchise,” Licht said. Any scenario can be either a huge mistake or a huge success.

Currently, most Mock Drafts along with Lovie Smith are leaning towards Jameis Winston. Normally, with a player of Winston’s arm strength coming from a pro style system, there would be no question whether he goes first or not, but off field issues such as rape allegations, shoplifting of crab legs, and shouting a memed vulgar phrase at a student union have poisoned the waters for the young Florida State Quarterback. Luckily for Winston, his behavior over the offseason has left naysayers second guessing. Unlike his counterpart Mariota, Winston has asserted his desire to not only play for the team but be the “face of this franchise.” Also worth noting is his close relationship with Bucs legend and NFL Hall of Fame inductee Derrick Brooks who was Florida State Seminole. As far as geography goes, Tampa isn’t the same atmosphere as the the cities of other potential pursuers like New York, so he won’t under-the-microscope nearly as much in Tampa. With his March 9th visit to the Buccaneer training facility, One Buc, his maturity was again put threw the gauntlet which should’ve given Licht a better idea of what he’s gonna do with his prized pick. Unfortunately, there are always outcomes that are unpredictable. One of the biggest fears (aside from maturity) is Winston’s pre-NFL similarities to Jamarcus Russell. While in college, their teams both dominated their division, they both had cannons for arms, they both have tremendous size, they could both run downhill, they both had off-field issues, and if anybody saw the “big bellied Winston” picture, you know it wouldn’t be hard for Winston to put a number like Russell’s 309 lbs. on the scale in a few years. Regardless of the similarities between the two, the Lovie Smith is the face of maturity in the NFL and the best person to help the talented Winston blossom into a franchise quarterback.

The second and equally conflicting scenario is drafting Oregon quarterback and most recent Heisman Trophy winner, Marcus Mariota. With Mariota, aside from a couple minor practice incidents, his maturity isn’t in question. Also, if his unofficial 4.52 40 Yard Dash time means anything, his athleticism is plentiful. Few QB’s in NFL history have posted times as remarkable as Mariota’s. As a matter of fact, if his time stands, he’ll 0.01 second out of the top 5 all time among quarterbacks. Unfortunately though, that won’t make a whole lot of difference if he can’t adjust to a pro style. Coming from a spread offense in Oregon, Mariota will have completely adjust to fit the pro style offenses off the NFL. For example, one thing Mariota will have to do is take snaps from under center which he hasn’t done since high school. Many may refute the implications of a change like this, but with a team like the Bucs, trying to find their niche, the worst thing that can happen is a high value quarterback come in and have a slow time adjusting. Luckily, on Monday, Mariota also had a visit to One Buc to get acquainted with the staff, so Mariota’s NFL readiness will be better determined better then. Also, considering the Bucs’ new quarterback coach, Mike Bajakian, was offensive coordinator in a multiple style scheme at University of Tennessee, the transition from spread to pro should be easier for Mariota.

The third and perhaps most boring option is to trade down and improve our incredibly weak offensive line. In 2014, the Tampa Bay Buccaneers were ranked 29th in Pass Protection and 32nd (dead last) in Run Blocking in a stat compilation by FootballOutsiders.com. At this point in time, there’s an inarguable case to trade back considering few teams with a last place offensive line make the playoffs. However, time and time again shows the unreliability of rookie offensive lineman. For example, in 1989, Tony Mandarich was selected 2nd overall by the Green Bay Packers with huge expectations higher than any lineman of his time, only to shortly become the face of steroid use during the NFL’s growth era (no pun intended). Luckily with free agency starting with a loud and crashing bang, the Bucs should be able to pick up some veteran free agent linemen.

In spite of the opinions given, one thing can be agreed mutually: this is the most important pick the franchise has had since the days of their creamsicle uniforms. There’s been hints of their intentions throughout the offseason, but nothing has strayed beyond total certainty, but the safest bets are listed below.

What should happen: Either option can be a potential bust, but the safest long term option would be trading back and overhauling offensive line and defense and developing the forgotten 3rd year QB Mike Glennon who, with some weapons, can be as good as any other QB.

What will happen: Jameis Winston… The temptation of having a guy with his ability will outweigh the volatility of his reputation. Also, the Bucs NEED to sell tickets, and having a Tallahassee guy in Tampa will surely propel the wheels of FSU fans’ cars. Who could forget Winston’s deceptive but wholesome charm? If there is one thing drafting him would accomplish, it’s marketability. Hopefully not Johnny Manziel’s brand of marketability.

Once again, the importance of this draft pick cannot be overstated. Each scenario walks the fine line of Success and Failure, but if there is one question Jason Licht could be asking himself right now, it would be who he’d rather let go.