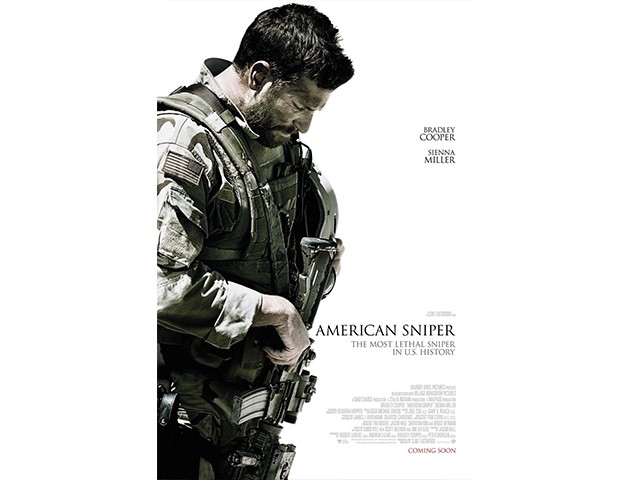 This much talked about motion picture , starring Bradley Cooper, was an outstanding film recollecting the life of ex-Navy SEAL Chris Kyle.  Centered around the trials of his life in the military, this phenomenal film portrays the true heroism of Kyle.

Bradley Cooper went all out physically in order to accurately portray the buff SEAL.  Cooper adopted the persona of a Texan–complete with in-lip dip, southern accent, and the love of cowboys.  The transformation that had to occur both off screen and on screen was impressive.  Not only did Cooper have have a physical transformation off screen, but in the film, he had to portray his character before war and during war.  Since Kyle originally wanted to be a cowboy, Cooper had to first portray an easy going Texan, and then a justice driven terrorist destroyer with 161 confirmed kills.  This impressive portrayal gave what this film needed in order to commemorate such an amazing life.

Chris Kyle and his younger brother were raised in Texas in a Christian home.  Chris had always been referred to as a “sheep dog” by his dad (meaning that he protected metaphorical sheep from metaphorical wolves).  He aspired to be a bronco ridin’ cowboy–but his life was later flipped when he hears of the conflicts occurring overseas in the Middle-East.  He went to inquire about the Navy, and heard about the SEALs.  Soon enough, he was shipped off to BUDs training where he then went on to graduate from sniper school.  While among training, he met his future wife. He was a natural sniper.  After the completion of sniper school he was shipped to his first of four tours of duty in the Middle East.  He struggles to balance his personal life with his constant struggle to find and catch the notorious terrorist that killed three of his SEAL buddies.  After his fourth tour in the Middle East, Kyle has accumulated over 100 confirmed kills, set records as a sniper, and has become a military celebrity.  His fourth tour was important for him.  He finally killed the man that had murdered his friends and countless other people.  He shot him at an unheard of distance of over a mile.  After this amazing shot, and barely getting out of this mission alive, Kyle finally decides to go home to his wife and kids.  As expected, Chris experienced multiple episodes of PTSD, but finally managed to transition back to civilian life by mentoring other veterans.  After years of doing so, he went to help a local veteran’s mother out who was worried about her son.  So he went to teach him some sniper points on a local range and was shot and killed by the veteran.

The shocking news shattered reality to all who knew Chris Kyle.  A funeral procession was held in Washington, D.C. where many spectators paid their respects to Kyle and his family. This film perfectly projects the emotions felt in the actual moment of his death.  The audience leaves the theater feeling like they had a personal relationship with Chris– and the actual footage of his funeral and the amount of people paying respect to Kyle, really pull on the emotional strings of the audience.  Clint Eastwood’s touching ending of the funeral left all of the audience silent as they left the theater.

This film truly is one that you do not want to miss.  It portrays, in a real sense, what a Navy SEAL would go through whilst commemorating such an amazing hero.