Before I Die book review 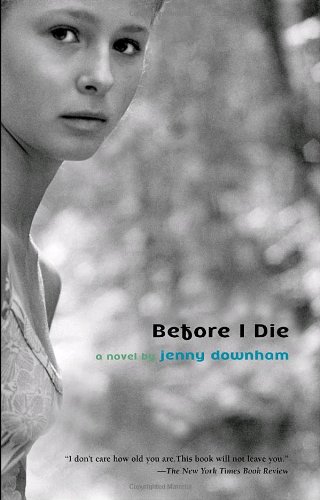 Hello, readers. I made the decision to write another book review this week, because there is a certain, special book I would like to talk about. The book is called Before I Die. Typically you’re supposed to write book reviews on newer books, but I have actually read this book multiple times since I found it a couple years back. This book is extremely important to me, because it opened my mind up to new ideas and influenced my writing style. The only catch is that it’s a young adult novel, which is odd, because I do not normally enjoy young adult novels.

I discovered the novel in our school’s library during the second semester of my freshman year. I was in the middle of my pretentious, hipster wannabe, know-it-all stage, so I was searching for a classic novel I could brag about reading to my friends. I had always been that way, even before I was filled with teenage angst. While everyone else was reading Twilight and The Hunger Games in middle school, I was reading works by Stephen King and Clive Barker. Due to only reading adult literature, I found myself opposing any kind of book that resided in the “Young Adult Fiction” section. I felt like the authors of young adult novels couldn’t truly understand how the minds of their readers worked, which ended up making the books come off as condescending. So, of course, when I picked up Before I Die, my first thought was “Oh great, it’s one of those books.” However, I decided that I would give it a chance, and I am grateful that I did.

The novel is about a sixteen year old girl named Tessa Scott. Tessa is supposed to be depicted as your average teenage girl; she’s interested in boys, argues with her father, goes out with her best friend, and has big plans for her future. The only problem, which is quite a big one if I might add, is that she suffers from a powerful type of cancer that is slowly destroying her. The novel begins right after Tessa made the decision to stop her treatments, which, in her case, is essentially the acceptance of death. Although Tessa may be giving up, she does not plan on simply waiting for her flame to burn out; she wants her existence to go out with a bang. She creates a list of things to do before she dies, and with the help of her best friend Zoey, sets out to do as many of them as possible. The list consists of some controversial things such as doing drugs, having sex, and breaking the law. Tessa does not want to hold herself back from any kind of pleasure that she could get out of what little life she has left. Along the way, Tessa ends up falling up with the ugly and depressed boy who lives next door.

I found the plot of the novel to be a bit stereotypical for young adult literature, but as I read deeper into the story, I was surprised at how capturing it was. Jenny Downham uses beautifully detailed imagery throughout the novel, which sets a sort of airy, ethereal tone to it. There were times where I found myself reading the story as if it was a poem, because of Downham’s lovely writing style. Her words made the characters so real to me, and I felt like I knew each of them personally; I felt sorry for them when they were in pain, and I felt warm when they were loved. Even though I could not relate to Tessa in any way and I could never fully understand what it would be like to have cancer at such a young age, the novel gave me a better perspective of teen cancer patients.
I also found myself enjoying how mature Before I Die was. The novel deals with some mature content that one wouldn’t typically find in a novel for youths. Whenever you do find mature situations in other novels of the same kind, they are almost always depicted in the wrong way. The author, like most adults, feels uncomfortable with accepting the fact that teenagers do have sex and other things of that nature. However, Downham seems to be the exception . She handles Tessa’s sexual experiences very well in the novel; not pulling humor from them or shaming Tessa for them. It’s apparent from her writing that Downham develops a sort of loving respect for her characters. She writes about what they would want to have written about them, rather than making harsh judgements on their actions based on her opinions.

Three years have passed since discovering this book, and I can unashamedly admit that I have read it five times. Well five and a half if you count what I have read so far during my current rereading of it. I really wanted to write a book review about this novel, because it means so much to me. No, I cannot exactly relate with Tessa, but I appreciate her character and what she stands for. I recommend this to anyone who wants to have a good cry, and let me tell you something: this story will hurt you. This book is so important to me, and I hope that everyone has that one story that means the world to them. If you’re interested, please check out the book. Also check out some of the other articles that my fellow Panther Press writers submit, because they are all so nice and awesome. If I could use a smile emoji right now, I would insert about ten of them. Thank you for reading!