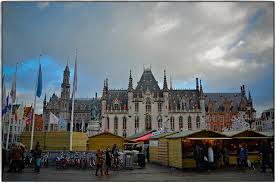 In some parts of Belgium, children put their shoes in front of the fireplace and they leave something for St.Nick like a drawing or biscuits. They might also leave a carrot for St. Nick’s horse and something for Zwarte Piet (St.Nick’s assistant). Then in the night, they arrive on the roof of their house, riding on his horse with Zwarte Piet. Zwarte Piet climbs down the chimney and leaves the presents in and around the shoes. St.Nick has a book in which he keeps all the names of the children, and it tells if they’ve been bad or good. Children are told that if they’ve been bad, Zwarte Piet will put you in his sack and take you back to Spain. In other some parts of Belgium, there are two Santa Claus figures. There is St. Nicholas and Pere Noel. If you speak the Walloon language, then St. Nicholas would visit you not once, but twice. On December 4th, he would come to see which children have been bad and which have been good. If the children are good on December 6th Old St.Nick will bring them their presents. For Christmas parties at schools, it’s common to buy a small gift which can be for anyone. A very popular game that is played, is putting on some music and passing the parcel around everyone sitting in a circle. When the music stops, that the one who holds the parcel gets to keep the present. Most people have Christmas trees, and along with trees they have a manger scene. Small family presents are also given at Christmas too, and they are traditionally opened on Christmas Eve. Some people go to a Midnight Mass service. After the Christmas holiday, New Years is next and many families eat another large meal together and sometimes have even more presents. At midnight people countdown to the new year, give everybody three kisses, and wish them the best for the coming year. Fireworks are also a very popular way to mark the new year. Some people have parties that last until the next morning and others just have a quiet family get together. There is also an old tradition that isn’t very common any more, but people would make a ‘Three Wise Men Pie’ or bread and a bean would be hidden in the pie or bread. Whoever found the bean would be the king or queen for the day. There are many new traditions in Belgium, but the old ones aren’t forgotten about either. Along with the new and the old traditions Belgium’s Christmas is spectacular for them and they can enjoy bringing in the new year with their friends and their family.