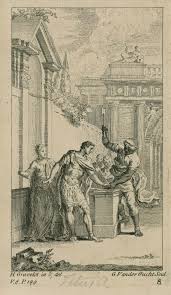 Recently, we were assigned to do a project on a Shakespearean play in AP Lit 12. I was given the play Titus Andronicus, and I figured I would give you guys my opinion on it. The play is not very well known, and it is not a very popular play either. In fact, it is one of Shakespeare’s least popular plays, and has even been deemed one of his worst by some critics. I enjoyed it for the most part, but I can definitely see why some people would be turned off by it. TItus is one of the most violent, horrifying stories I have ever read. Some people dislike reading about people rape or anything that involves gore, so it can be a bit difficult to get through. There are also a few issues with how Shakespeare set up some of the characters in the play. I did my project on the feminist literary criticism of Titus, and let me tell you I did not have any difficulty in finding what I needed.

Okay, so first of all, the story is gross. Like I said earlier, a great deal of people cannot even get through the story, due to its brutal violence and gore. There is a character stabbed and killed, usually by someone in their own family, about every three pages. Sons are murdered before their mother’s eyes, fathers stab their own sons, a girl is raped and mutilated out of fun and people are killed and put into pies. Yeah, that’s right, two guys are murdered, have their bones and blood turned into a paste and then baked into a pie that their mother will later indulge on. Although these kinds of things would seem disturbing to most, I find them interesting. I have always been a fan of those campy, gorey horror flicks, and Titus was not the most gruesome thing I have ever read. In fact, I felt like Shakespeare could have went into more detail on his pie recipe. They definitely don’t have that one on Pinterest.

Although Titus had me reeled in by the glorious gore, I was irate over how the female characters were presented in it. So you only have like two women in the entire play, which are Tamora and Lavinia. Tamora is this awful and brutal queen who has a secret love affair, encourages a rape and has a really abnormal relationship with her children. Like I’m not saying anything but…I’m just saying. Even though Tamora is clearly terrible, her evilness is wrongfully portrayed in the play. Shakespeare essentially prosecutes Tamora for her wrongdoings because she is a ‘powerful’ woman.’ Let’s face it: nothing frightens men more than a powerful woman;  they like to cling to the ridiculous notion that women need to be weak and inferior to men. Shakespeare ruins it, because he goes about it in an unacceptably misogynistic way.

And then there is the character of Lavinia. Lavinia is the daughter of the main character, Titus, who just loves her so much. He loves her so much that when he discovers her raped and mutilated body, he goes on a tangent about how much his life sucks. Or let’s not forget when he encouraged her to kill herself, because now that she is mutilated, she is ugly and her life will suck. Oh and at the end when he stabs and kills her, so that she will not have to continue living an awful life. Titus is the main character of the play, therefore no matter how ridiculous and cruel his actions are, he is not questioned. He can do whatever he wants to Lavinia without even asking her permission, because he is her father and therefore she is his property. Am I the only one who thinks this is preposterous? As I read the play, I just found hating Titus more and more.

Overall, Titus Andronicus was a fun read. Even though it was assigned in class, I could not put it down. I could not wait to see what crazy things the characters would do next. However, there were times when I was upset by the dynamics of the play. Shakespeare could have done a better job presenting some of his characters in this one. I recommend this play to people who can handle reading about violent things like rape and torture. There is absolutely nothing wrong if these kinds of things make you uncomfortable, and if reading about them will put you off, you probably shouldn’t read Titus. Also if you don’t particularly care for unnecessarily lengthy films that do not make sense at all, don’t even attempt to watch the film adaptation. Thanks for reading guys!