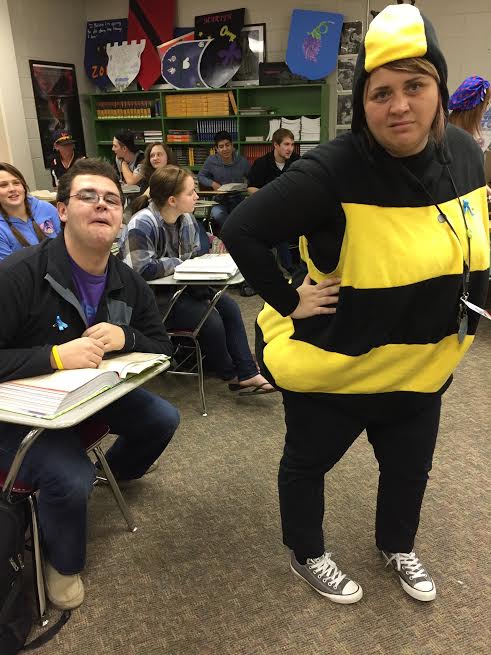 Ms. Wallace buzzes around her students with bee sass.

For the first time in what seems like eons (according to many long standing teachers), Lenoir City High School has permitted students to don their Halloween costumes in support of Elliot Crabtree (the son of Mrs. Crabtree) who was born with the genetic disorder Athrogyroposis or AMC.

Today was an emotional day for many die-hard Halloween fanatics in the school.

Upon entering the high school (very early this morning), I strut into the commons clad in a Hot Topic black and white tutu dress, filmy wings, and gothic jewelry to assemble myself into a raven.

The commons was empty of costume wearers.

I collected many head turns and whispers. I truly thought that I was the only person dressed up for the day in the entire school.

Then I turned a corner.

There was a bear, a Rasta man, John Egbert (from the ever popular Homestuck web comic), and a beautiful maiden from Vocaloid’s Dark Woods Circus.

I felt at home in this small motley crew. We all acted our parts–Rasta man humoring me with his makeshift Jamaican accent and following me with his Ska music and the bear growling at me with the most realistic bear noise a human has ever produced. As we ventured down the hallway selling blue ribbons for the Elliot Crabtree cause, I became even more happy at the sight of all of the costumes.

Seeing all of the costume wearers arriving made me happy first of all because they were supporting baby Elliot, but what also made me happy was the creativity in these mostly homemade costumes.

Rarely did I see a fully store bought costume. These costumes were pieced together out of anything lying around into these wonderful and often times hilarious works of art. People really stepped out of the box this year.

A white nightgown was transformed into something bone chilling along with braids and red makeup to resemble the doll from the movie Anabelle. Dotted face paint and painted exaggerated expressions created the “comic book character”. People used poster board, old fabric, actual pieces from their wardrobe, and anything else about their possessions to create these looks.

I was in awe at the creativity that was walking up and down the hallways. It was truly amazing to see this side of our students if only for a day. It was truly unique. I did not see the same costume twice or the same character twice.

The variety of characters was outstanding too. You had Superman, Disney Princesses, but you also had the anime characters and the abstract idea costumes (i.e. night and day, angry business owner, etc.).

The student body was not alone in the creativity. Teachers sported costumes as well. Upon entering AP 11 English I was greeted by Wilma Flintstone clad in her animal skin and orange hair. I saw an Indiana Jones exploring the hallway, and a very peppy cowgirl teaching art.

However, most of all, I feel as if the Most Valuable Teacher Costume Wearere of The Day was most definitely Mrs. Wallace, or should I say Mrs. Queen Bee. The Wallace was decked out in a full body bee costume complete with a little bee cap and a full bee behind (stinger included). She carried a great sense of humor about it, and on many occasions, attempted to sting me…

I was truly impressed by our student body last Friday, and I hope that they were impressed with themselves as well. That kind of creativity and whimsy is rare in this day and age, and I hope their costume creativity reflects their all around creativity.

So as the day came to a close and the fake mustaches began swinging off of their respective lips and makeup started to run, I traveled home, wings fluttering against the wind, pleased with the day I’d traveled through and hopeful to see that sort of thing at LCHS again.