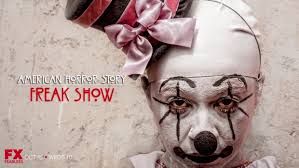 Earlier this week the FX super-show, American Horror Story: Freak Show was sued for promoting Coulrophobia (clown fear) to their viewers. The Clowns of America International are more than angered at the show for portraying Twisty the Clown as a murderous, sadistic creature. Thus, their reasoning in suing the infamous show for “wrongly” portraying clowns as antagonistic when they are supposed to be something to bring merriment.

The lead clown in transform them into something horrible and a worst nightmare. This very statement is one amongst many things that caused the creator of this season’s story-line; Ryan Murphy, to speak up about what the show is truly showing. Though, yes, each season does spell out new fears towards their audiences, each season also has something to do with some horrific part of America’s past. Hence the name of the FX show.

This particular season is their fourth and most popular by demand, and it is also related to a serial killer in the 1970’s known as John Wayne Gacy. Gacy was known to his neighbors and co-workers as just another normal man, and though his past had been bloodstained with the abuse of both of his parents, and even the sad dismissal from two marriages, no one would ever suspect he would have the inclination to complete nearly 33 murders. However, Gacy loved to once bring cheer to many through his second occupation as a party clown. Soon he became known as his alter ego,Pogo The Clown, and later Gacy would shift into this disguise to brutally murder each and every one of his victims. His victims were usually in their teens, and majority of them were males, although it has been proven that there were a few switches within the group of dead bodies. After Gacy would lure the young adolescents into his home by his alter ego, often times sexually assaulting them, and eventually he would find the “compassion in his heart” to kill them off.

Once these accusations were made against the American Horror Story writers and directors, Ryan Murphy stepped up and released the hidden story of how Gacy played a large part in the making of this season. Since this, the lawsuit has not moved much, and many fans of the show are speculating on whether or not it will actually take its day in court or not. This will be something to be watched and listened to in the future for sure.