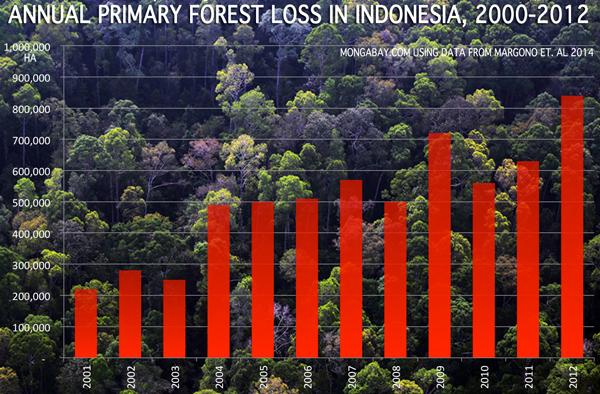 One of the largest, most well known rain forests is the Sumatran rain forest, and in spite of the recent moratoriums, is declining.

The Sumatran rain forest, covering Sumatra and Borneo, used to be home to vast areas of trees, swamps and other marvels of nature. However, after the recent efforts to log, settle plantations, and establish other industrial ties, many of the lands’ most sacred species are diminishing. This island was previously inhabited by trademark animals of this biome like tigers, orangutan, native species of Ibis, etc., but since companies have claimed their stake here, these species, like the others, have become futile.

Common domestic products like chocolate and especially paper are derived from the primary sources mined in Sumatra, so the potential profit for industries to settle there is massive.

The effect, however, on Sumatra and Borneos’ ecosystem isn’t all visual. Estimations on the the decline of this rain forest land around a 50% with a potential loss of up to 75%. For example, only 250-400 members of the tiger species remain, according to the International Union of Conservation of Nature (IUCN).

Following these findings and the endless calls for change from the various ecological organizations, the Indonesian government decided to renew the previously set moratoriums. However, not long after this mid May extension, Indonesia became the official world leader in deforestation.

Other side effects of this deforestation include rioting and land conflict between plantation owners. Following the the mass amounts of plantations being settled, discrepancies over land ownership have escalated. In extreme circumstances, some landowners have killed neighbouring landowners following their property disputes.

The company Asian Pulp and Paper (APP), Sumatran deforestation’s most responsible party, issued a statement apologizing for its destruction following drops by popular consumer brands like Adidas and Hasbro.

As anyone who’s taken Biology knows, if these companies would have been granted the right to continue their destruction, their would be a world wide domino effect. In the carbon cycle, every human and plant is dependent on another, so when a forest as massive as Sumatra’s is chopped down as quick as it has, the bad surely outweighs the good.