What were they watching in Their Eyes Were Watching God? 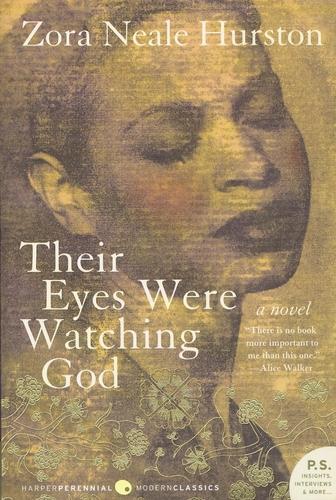 Zora Neale Hurston wrote her novel Their Eyes Were Watching God in only three weeks before it was published in 1937. The novel tells the story of a black woman named Janie searching for love and her role in the world. Janie is always being told who she is and what she needs to do to find her happiness. She has to go through two wasted marriages before she finally meets her true love. Of course there is more to the story than love, but that is one of the main topics. Hurston bases the relationship between Janie and her final husband Tea Cake on a love affair she had with a younger man. The novel was actually initially rejected when it was first published. Many people opposed Their Eyes Were Watching God because they felt it was mocking the Southern African-American community. It was not until the 1970’s that people began to value its important message. There was also some controversy about the characters’ sexuality due to the fact that it was inappropriate for black women to discuss their sexuality at that time. One of the reasons I enjoyed the book so much was because of how bold Hurston was. She refused to censor her story to conform to the set rules for female writers.

The relationships between Janie and all of her husbands all meant something to me. Janie’s first husband, Logan Killicks, was a wealthy man who was much older than Janie when they were married. Although Logan treated Janie nicely and owned a lot of land, she could not bring herself to love him. After she could not stand Logan any longer, Janie ran away with a charming man by the name of Joe Sparks. Joe was confident and much more adventurous than her first husband. He and Janie went south to a rumored community run by other black people. When they discover the town is no more than some shacks on a large patch of marsh land, Joe takes matters into his own hands. He ends up becoming the mayor of the new town called Eatonville. It seems that the love between him and Janie slowly deteriorates after he becomes in charge. As they grow older together, Joe takes out his aging frustration on Janie. Things only get worse between the two until he becomes ill and eventually dies. Although Janie is perfectly content with being a widow, she soon falls in love with a young man who goes by the nickname Tea Cake. The people of Eatonville feel that it is inappropriate for Janie to flirt with Tea Cake so soon after Joe’s death, but Janie does as she pleases. Not too long after becoming intimate with Tea Cake, he convinces her to go away with him.

The different relationships are all so important because they help Janie on her journey of finding herself. From the moment Janie was born, she was told who she was supposed to be. Her grandmother told her she had to be a good wife above all things, and marry a well off man. Her first husband Logan wanted her to love him no matter what even though it was clear she could not. Her final husband, Tea Cake, wanted her to be completely submissive and do as he told her. Even after she had to kill Tea Cake, the people in her community wanted her to be a cold hearted, spoiled housewife. Janie had to discover who she really was when she was not being told who she had to be. The journey of Janie’s self discovery was the most important part of the story. Hurston used Janie to portray herself and her own discoveries from love.

There was a particular part in the story that really stood out to me. When Janie and Tea Cake were living together on a sort of farming community, a violent hurricane hit them. As Janie, Tea Cake and their friend Motor Boat sat in their house awaiting the worst of the storm, they stared out into the darkness through the open door. They were staring out into “…the dark but their eyes were watching God.” (124  ) This scene was obviously quite important to the book. It touched on one of the book’s main themes: humans have no control over what God or life has in store for them. The wrath of the hurricane hitting them was a beautifully written metaphor of the fear of God.

Their Eyes Were Watching God was a wonderfully written book that I would recommend to anyone. Hurston’s novel reminds the reader of the importance of women and appreciation of the world around us.