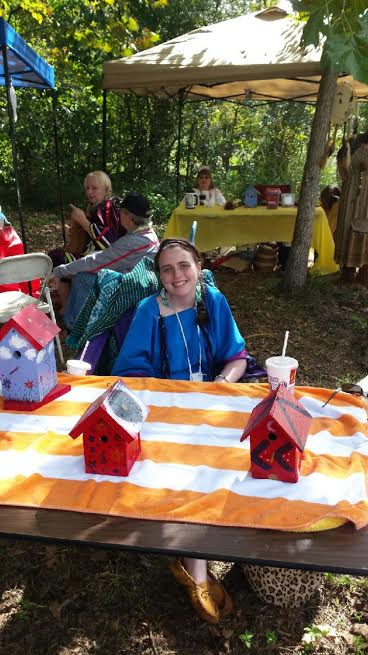 Prior to festivities, the Overhill Indian Nation grounds resembles nothing more but a mere field settled beside an ordinary creek. There are no rattles shaking, no bells chiming, no trades made. Slowly people arrive. One car with Ohio plates parks, and then another and another until the field is filled to the brim with all different vehicles from all corners of the United States (and a few rentals carrying people from out of the country). The fun unfolds. Tents are pitched, blankets placed, dishes of food set on tables (all free–bring some for yourself but always bring some to share), and vendors scatter their small markets about the sacred ground.

I had always been aware of my heritage. I had the usual,“Oh my father’s mother’s mother was a full blooded Native!” resting subconsciously in the back of my mind. Really, it was nothing more to me–at the time–than if I told someone that I was a citizen of Lenoir City.

However, a few months ago, there was a call to my father from a not-so-distant cousin who claimed to actually be a Native American chief of a large organization called The Overhill Indian Nation. We were told the story behind our descent and invited to join this nation.

Being just like any other suburban family, we were shocked but did not take it absolutely seriously. That is, until we took the journey to our cousin’s home.

Fast forward to September: the time for our first “gathering”. We were so anxious about attending. Would there be many people? Would we stand out? Would we fit in?

As we drove through the gates, we felt immediately at home. There were all different sorts of people everywhere. Nobody was of the same person. In all of my life I have never seen a more diverse group of people. It didn’t matter who you were or what you did for a living. You were welcomed as a brother or sister. You could eat from the tables, talk to the mothers, sit with the chief–even sleep in someone’s camper if need be. I was so shocked at the generosity of the people.  To give a gift was not something uncommon and to think of others before yourself was a necessity.

After everyone got settled in, there was a beautiful, semi-traditional Cherokee wedding held inside the Sacred Circle. After that–and a few tears shed due to the beauty of the ceremony–there was food and, best of all, The Trade Blanket.

One could acquire anything at the trade blanket had they something to trade. Anything from bird feathers to baby dolls, and everyone was kind and honest in their dealings.

After about two hours elapsed, the Chief called the nation about the circle for the ceremony.

Everything about the ceremony, this one in September being the Ripe Corn Ceremony, was holy, sacred, and respected. There was no talking, no smoking, no getting up. It was very serious and meant to be taken so.

Next, the chief opened the ceremony and said a few words for the nation and for the passed members of the nation. The Ripe Corn Ceremony followed.

Next there was the Women’s Tobacco Ceremony which was followed by the Men’s Pipe Ceremony. Both are similar in style save the fact that there is no usage of tobacco in the Women but the casting of it into the Sacred Fire.

Finally (and most anticipated by me) was the Naming Ceremony.

After a whole day of clammy palms and muffled prayers came my moment. I was to be given my tribal name.

I approached the circle with shaky knees and short breath. Onlookers offered touches of support and nods. I walked into the Sacred Circle carefully and quietly to the Chief (my cousin) to receive my new name–always trying to break the stress in my head with the pleas of, “Oh God don’t let it be Runs with Scissors…”. I shut my eyes and immersed myself into the chanting and shakes of the Chief’s rattle.

I was named Woman Sun Star.

This is regarded as a very powerful name in the nation. All the components of the name break down into significant things, and well, the inclusion of the Sun says it all. It is a rare and unique name I am honored to have received.

Overwhelmed with joy that my name was everything I hoped it to be, my evening closed with a short dance around the fire and then some hugs to the good friends I made.

At the end of the night, people returned to their cars and campers. Some made their way to airports, some to hotels, but everyone was always sure to say goodbye to all the friends they made that day.

I guess the purpose of sharing this experience is me being so amazed by the generosity, kindness, and magnificence that I witnessed on what would have been just a regular Saturday had I not made the decision to break my much needed slumber and drive an hour to Tellico Plains. The experience has taught me so much about respect and friendship. The ceremony warmed my heart and created morals within my life I previously lacked. Things like, serving others before yourself and overall selflessness. Caring.

Two months ago, I was Kiyah Ann Moore. A regular (argue if you will)  student from Lenoir City High School, a regular citizen of Lenoir City. Just Kiyah, nothing special.

Yesterday I transformed into not-so-regular Woman Sun Star who belongs not just to the people and school of Lenoir City, but also to the people across the country and world of the Overhill Indian Nation.