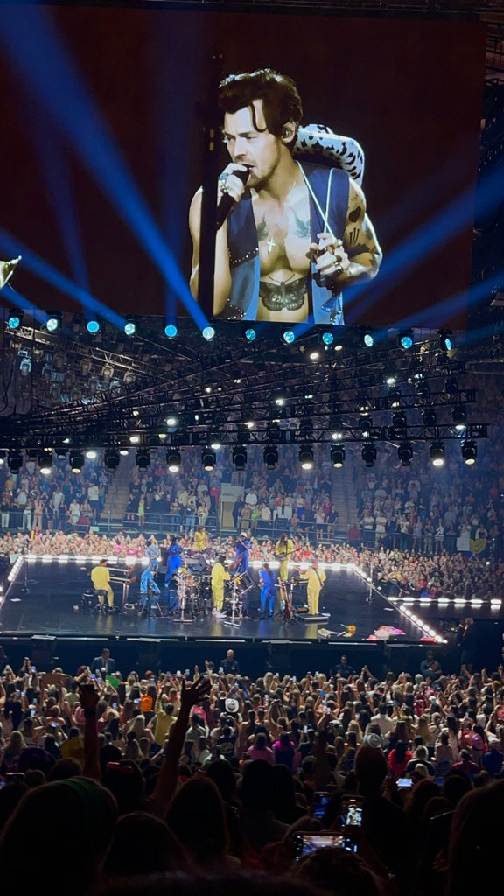 Around the world, people are brightened by music as it moves them. Music can be made in many different forms, which reaches an endless possibility for audiences. Everywhere people would then click with an artist which would become their person.

Harry Styles-popstar of this age-has been performing ever since his start in One Direction back in 2010. After his amazing run in One Direction with 5 hit studio albums, he proceeded to continue making music in his solo career. He would then go on to release 3 award-winning studio albums that took the world by storm. His music gifted listeners with pop excellence and passionate ballads. He would go on to create hits like “Sign Of The Times,” “Adore You,” and his #1 hit “Watermelon Sugar.”

On May 20th, Styles would go on to announce his 3rd studio album “Harry’s House,” which would then be followed by his ongoing #1 hit lead single “As It Was.” Fans then unexpectedly got surprised with a Love On Tour Is Harry’s House. Styles shocked fans with outrageous dates across North America including 15 nights at Madison Square Garden, 15 nights at Kia Forum, 6 nights at United Center, 6 nights at Moody Center, and 2 nights at Scotiabank Arena. Styles tour was in such high demand fans had to sign up for a system on Ticketmaster called verified fans where fans would get randomly get selected to be on the presale, while others got waitlisted. When the sale went live, all shows were flooded with thousands of fans which led to all shows selling out within 10 minutes.

While the sale went live, I was one of the lucky few to get tickets, by slim chance, I was able to get two different shows on the same weekend in August. Once the final plans were made, I made my way to the airport to fly out to New York. When I arrived in the city, the streets were filled with fans from all over the world. After concerts started back up after COVID-19, concert culture was at its all-time high. Styles had fans camping outside the venues up to 2 days prior to the event in hopes of getting the best view from the floor. Styles had influenced fans to create their own intricate, colorful outfits for his shows. A common trend was bright colors, jeweled pants, jumpsuits, and most dominantly boas. All across the city, boas had covered the streets, either being worn by fans or remanence of them flying across the streets.

Concert culture creates an outstanding environment as it gives fans a place to be themselves. Senior McKenzie Powell has been influenced by this lifestyle.

“As soon as I walk into a venue, all my worries go away, and I can only think about seeing my favorite artists for the next few hours. Meeting new people is also an amazing part of the experience. It’s super cool to be involved in a large group of people like that that are all there for the same reason. It makes it very easy to get along with others,” Powell said.

Once the show begins, fans may express themselves by screaming out the lyrics to their favorite song, dancing their hearts out, or even crying their eyes out. Although the concert doesn’t go forever, the show may last forever through videos, merchandise, or even in our hearts.